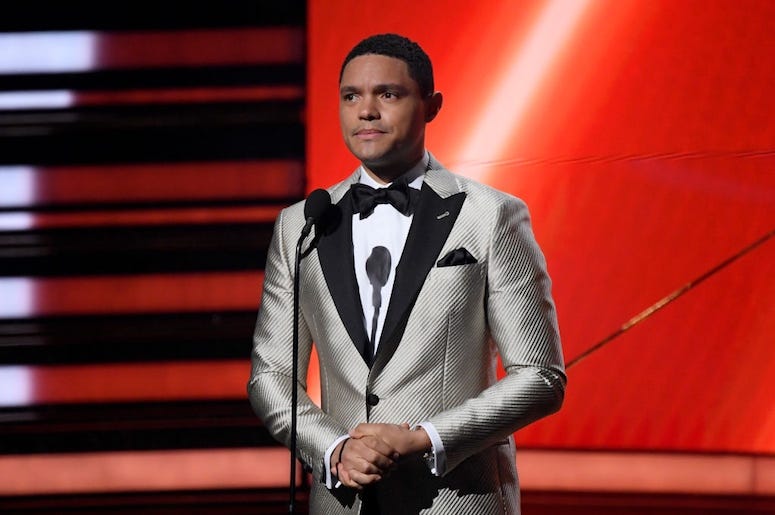 The host of the 63rd Annual GRAMMY Awards has been revealed and he’s guaranteed to make you laugh.

Comedian and host of The Daily Show Trevor Noah has been tapped to host the 2021 GRAMMY Awards. The award show is set to take place on Sunday, January 31, 2021 and will air on CBS at 8PM ET / 5PM PT.

"Despite the fact that I am extremely disappointed that the GRAMMYs have refused to have me sing or be nominated for best pop album, I am thrilled to be hosting this auspicious event," Noah said in a statement. "I think as a one-time GRAMMY nominee, I am the best person to provide a shoulder to all the amazing artists who do not win on the night because I too know the pain of not winning the award! (This is a metaphorical shoulder, I'm not trying to catch Corona). See you at the 63rd GRAMMYs!"

We’re thrilled to welcome @TheDailyShow host, Emmy-winner, and GRAMMY-nominee @TrevorNoah as the host of the 63rd #GRAMMYs!

We can’t think of a better person to serve as Master of Ceremonies for Music’s Biggest Night. 🎶 pic.twitter.com/vbFqPbXfgl

"With a knack for keeping viewers engaged and entertained, Trevor is the perfect choice to lead us through what's sure to be an incredible evening full of music, unforgettable moments, unity and inspiration," Harvey Mason Jr., Chair and Interim President/CEO of the Recording Academy said in a statement.

"He is a dynamic host, comedian and personality, and we're thrilled to welcome him to the GRAMMY stage as host of Music's Biggest Night for the first time."

The 63rd Annual Grammy Awards will air on CBS at 8 PM ET/5 PM PT on Sunday, January 31, 2021. A special GRAMMY Awards Premiere Ceremony will stream live on the GRAMMYs website ahead of the big show beginning at 3 PM ET/12 PM PT.

In total, Noah will be tasked with handing out awards for 84 different categories honoring the best music of the past year.

news
Man charged after allegedly scamming $1 million from grocery store
news
Fauci says US 'can and should' vaccinate this many adults by end of summer
news
Bernie Sanders is selling a sweatshirt inspired by viral inauguration meme for a good cause
sports
Ex-Lions coach Matt Patricia returns to New England as Patriots assistant
news
After 55 years in the business, veteran NBC anchor Tom Brokaw is retiring
sports
Nationals re-sign franchise icon Ryan Zimmerman