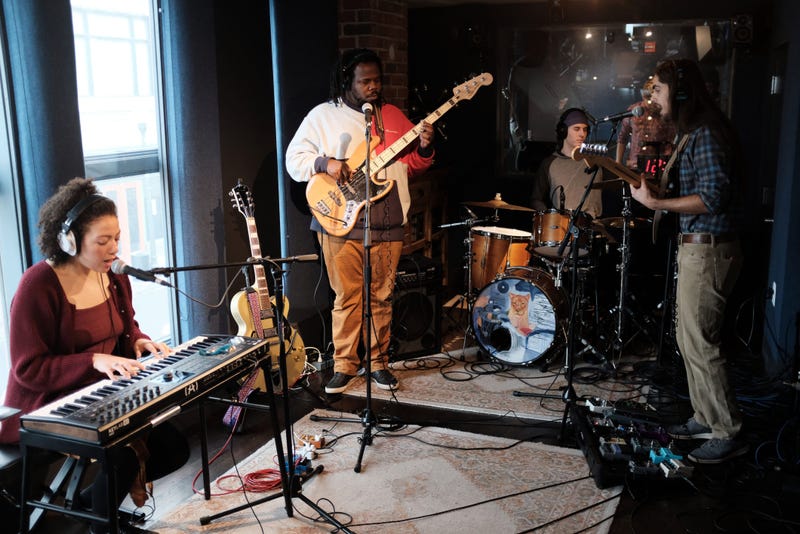 Honey Monsoon is certainly not a band that can be pigeonholed.

With origins in both Ypsilanti and Detroit, the group fuses together soul, indie and jazz for a unique sound that is seemlessly executed and arranged through impressive musicianship.

But the fusion doesn't stop there.

Comprised of members Ana Gomulka (vocals/guitar/keys), Taylor Greenshields (drums), Sam Naples (guitar/vocals) and Alex Binho Manenti (bass/keys), the group also features visual artist Leo Willer, who has painted on stage during many of their live shows and even during their time spent in the recording studio.

During a recent appearance on Behind the Mic with Pam Rossi, lead singer Ana Gomulka explained why they find it important to have a variety of creative elements incorporated into their projects.

"We all draw and create in our own ways outside of music, so I think having that representation on stage was really powerful for our performance," she explained to host Pam Rossi. "It's like an instant reflection of what we're doing and what we're creating."

The group released their first album Rose Gold in November 2017, and dropped their sophomore album Opal Soul, last March.
Currently, Honey Monsoon is on a bit of a hiatus, while they take some time off for the band members to pursue other creative projects. However, they will be releasing an electronic remix of their album Opal Soul in late spring.
In the meantime, you can enjoy their performance and interview on Behind the Mic as many times as you want! Check it out below, and head to the band's Facebook page to stay up-to-date with their music and new shows.