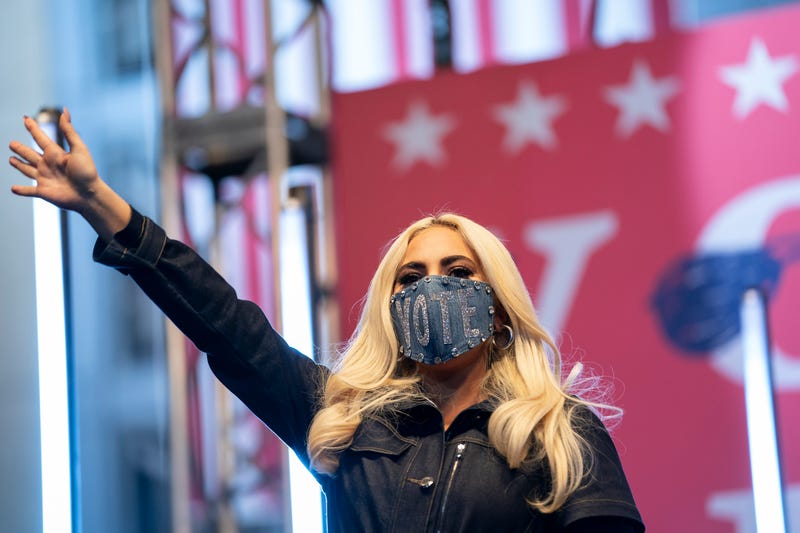 Election Day has arrived, and if you have not voted yet we hope you are reading this while in line at your local polling place. However, we aren’t the only ones urging you to exercise your right to vote. Taylor Swift, Ariana Grande, Lady Gaga, Beyoncé, Katy Perry, Lizzo, Megan Thee Stallion, Halsey, and Demi Lovato all want you to vote and have the proper resources to do so.

These artists all serve as an inspiration to us every day, now let their messages about voting and getting to the polls inspire you to let your voice be heard.

If you are dropping off a mail-in ballot today, make sure to only drop it off at an official ballot dropbox or drop it off at your local polling place.

WATCH MORE: From long lines to filling out ballots: Know your rights on Election Day

T-Swift gets it. She knows you’re stressed, exhausted, and anxious but she is here to remind you that today is your last chance “to make your voice heard.” This was the PSA we all needed to wake up to this morning.

today’s the day. find your nearest polling place at votesaveamerica.com/plan.

Well, it’s no surprise that AG is posting crucial voting information today. Grande has been using her platform since the Primaries began to spread awareness to young voters. As Ari gently reminds us that today is the last day to vote, the singer shares times that polls across the country open, dos and don’ts for the polls, voter rights, and state-by-state voter protection hotline phone numbers. Voter protection hotline numbers should be called if you experience harassment at your polling place or witness any form of harassment at your local polling place.

Leave it to Katy Perry to add a splash of camp to her voting efforts. Clad in a sweater dress, a mask, and a giant “I voted” sticker headdress, Katy Perry dances around the streets of Los Angeles’s San Fernando Valley to catch the attention of drivers and people passing bye. As “Not the End of the World” plays throughout the viral video Katy dances in front of a Sherman Oaks Ballot dropbox and garners honks from those that support her efforts.

During Joe Biden’s final campaign event in Pennsylvania last night, Lady Gaga delivered an impassioned speech about the importance of voting, particularly voting for the lives of women. “If you believe in Joe Biden, make a plan to get to the polls tomorrow, turn out is going to be critical, so get there early, get there as early as you can,” urges Mother Monster. “I know you’ve seen the polls”, says Gaga. But she powerfully adds, “The record number of early and mail-in votes, it’s tempting to feel comfortable and confident and sit back, but now is not the time to feel confident and sit back. Right now it’s time for action.”

When I think of this country I don’t think of its laws I think of its people. I think about how we were raised to be patriotic of violence, propaganda & war. I think about how this country is owned by the oppressor and how the oppressed are locked in a valley of capitalism. But I also think of the young people who refuse to be spoon fed mistruths. I think of the elders who bucked against hateful prejudices even when it felt impossible.... Because of you, I’m still hopeful. I believe in a country that teaches the true history so we can better understand where we live and how we can do better. I believe in a country that listens to the cries of the protester and doesn’t politicize death. I believe in restoration of this beautiful land and respecting the communities of people who owned America before colonizers renamed it. I believe in fairness, equality, a complete removal of religion in places where it does not belong. Let religion live in the churches and places of worship... the quiet prayer rooms, the joyful congregations.. and out of Congress. I believe in so much, and if I believe it one day I can see it. It may not be tomorrow it may not be today, but it will be one day if we stay activated. We the people, ALL the people, deserve it. Today’s the last day to vote. Stay in line, stay determined and thank YOU for voting.

Draped in the American Flag, Lizzo shares that she is thinking of the people today and is still filled with hope. On Instagram the singer writes, "We the people, ALL the people, deserve it. Today's the last day to vote. Stay in line, stay determined and thank YOU for voting."

You have the right to vote fairly and safely, but if you run into any issues call the National Voter Protection Hotline 833-336-8683🗳 pic.twitter.com/JSBgMHfa98

As if her messages weren’t clear enough after she released “Commander in Chief” Demi Lovato most certainly wants you to get out and vote. Ahead of Election Day today, Demi shared the National Voter Protection Hotline phone number across all her social media platforms.

HOTTIES GET UP AND MAKE SURE YOUR VOICE IS HEARD 🔥🔥🔥 Real hot girl shit is about making a difference and going hard for everything you stand for ! Make sure y’all at them damn polls tomorrow!🔥🔥🔥🔥🔥

Calling all hotties! Meg wants you to “GET UP AND MAKE SURE YOUR VOICE IS HEARD” * insert flame emojis here * As she explains her Instagram caption being a hot girl means that you’re “going hard for everything you stand for !” Meg better see you at the polls today.

I am anxious. I’m sure you are too. This is a bandaid. But a necessary action. Empower yourself. Empower others. Empower the memory of those who didn’t have the ability to vote. For your ancestors and for your future. Sending Love. #BidenHarris2020 (@britneytokyo with the statement nailzzzz)

Halsey is voting for our future and she wants you to do the same. The singer shares selfies with her mail-in ballot, her “I voted” sticker, and her manicure that reminds us the Election Day is on November 3rd. “Empower yourself. Empower others,” Halsey writes.

Texas! Beyoncé is counting on you to get that vote out! Alongside a stunning selfie with her “I voted” sticker, Queen Bey writes, “Come thru, Texas! #VOTE”