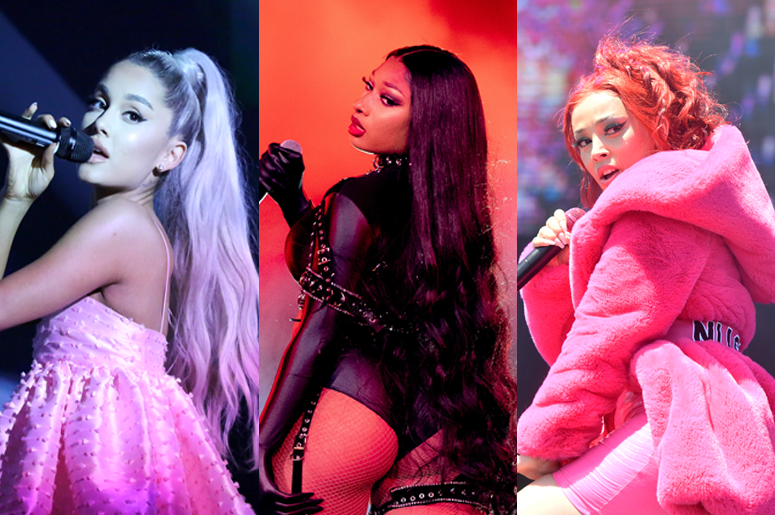 We didn’t think it was possible to be any more obsessed, or for the song to get any raunchier, but alas, we find ourselves here. Less than three months after the original was released, Ariana Grande enlisted contributions from Megan Thee Stallion and Doja Cat for the remix of her titillating track, “34+35.”

Both Hip Hop baddies unleashed their own take, providing poetically vulgar verses that will surly make the prudish blush. Building on the song's already sexual nature, Doja raps, “Can we stay up all night, f*** a jet lag / You bring your fine a** and overnight bag.” She even takes a not-so-subtle swing at the rainbow-haired rapper everyone loves to hate with the addition of, “I want that six-nine without Tekashi.”

Followed by a repetition of Ari’s chorus, Megan, up next, came in swinging. “Rock you like a baby / But you know I’m ’bout to keep you up / Welcome to my channel and today I’m bout to teach you sum.” And those are some of the more modest lyrics.

Just as straightforward as the song, Grande decided to tease, announce and release the song all in less than a week. Only one day after teasing fans with a vague visual that featured two silhouettes with question marks, Ari announced Meg and Doja as the previously undisclosed features. Sharing the news on social, Ari simply wrote, “tonight” tagging both @dojacat and @theestallion.

Within the 24 hours between the tease and the reveal, Ari’s fans occupied their time speculating who the two artists might be. Thanks to a ocular comment left by Meg, many were correct to believe she’d be one of the mysterious additions.

The updated track arrives along with a vintage monster movie vibe lyric video, that puts every lascivious lyric of this raunchy remix on display. Which honestly, we have absolutely no complaints about, and doubt you will either, so enough chit-chat go ahead and check it out below.