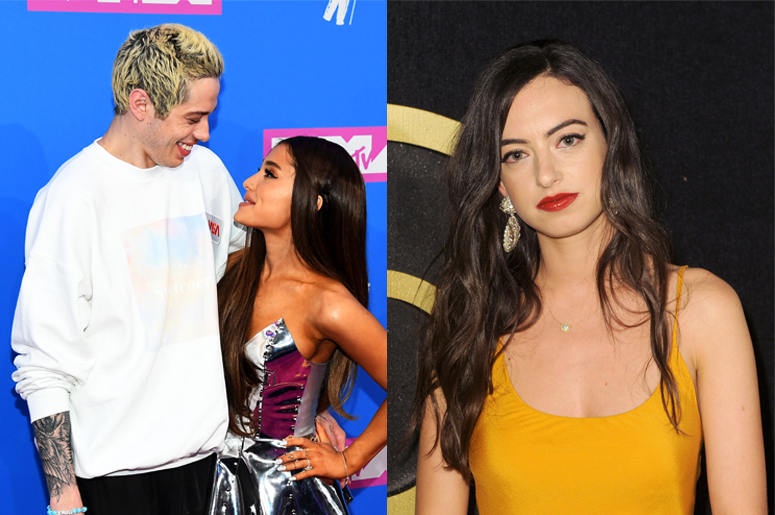 So here’s what we already knew, Ariana Grande and Pete Davidson had themselves a whirlwind romance and very brief engagement in 2018. What we’re currently being clued in on is that Pete’s ex, Cazzie David, who he had been dating for years, is dropping new details about the timeline of Pete apparently moving on with Ari days after their split. The audacity…

Would expect nothing less from the daughter of Larry David.

Damn. Well Pete, it’s been two years since you did Cazzie dirty and now she’s spilling all the tea and then some in her new book “No One Asked For This: Essays,” spotlighted in the Los Angeles Times.

When sitting down with the outlet to discuss the book, which shares intimate details of her and Pete's relationship. Cazzie broke it down, sharing that she and Pete were "infatuated" with each other, but she often had a hard time convincing him of just how much she loved him.

Frustrated, she initiated a break, but after realizing that wasn’t what she wanted, called him a few days later to admit her mistake. At some point within those few days Pete and Ari had linked up and well the rest is tabloid and BDE history. Pete informed Cazzie that he was "the happiest he had ever been," and then officially dumped her via text message. Unbeknownst to her at the time about the who, what and why of it all, that very same week, Cazzie learned that Pete was now with Ariana.

As we could all imagine, the breakup was difficult for Cazzie, as she detailed in her essay. Beyond the expected heartache, Cazzie was also dealing with fans of Pete and Ari's relationship trashing her on social media and constantly being inundated with images of Pete and Ari. She couldn’t get it out of her head and admitted frequently imagining them "immediately falling in love, accompanied by audio of her baby voice whispering sweet nothings in his ear, dubbed over his past declarations of love and trust to me.”

In hindsight, Cazzie now says that difficult time changed so much for her, "It was a really pivotal moment in my life,” she told the LA Times. "And writing about it has caused me a ton of anxiety, especially because I talk so much about hating the attention it brought me. Why would I bring more attention to myself by writing about it? But there’s nothing that’s gonna be worse than what I already experienced with that.”

Surprisingly, even with how hard the breakup and whole experience was for Cazzie, she admitted that she and Pete are actually friends now. Even thanking him in the acknowledgments of her book: "Pete. I love you... Your bravery inspires me and your friendship means the world to me.”

Well… we have to say, definitely not expecting that outcome, but good for them. That’s very adult of both of them. Anyways, if you’re interested in reading what Cazzie has to say, No One Asked for This by Cazzie David comes out on November 17.