WILMINGTON, Del. (KYW Newsradio) — President-elect Joe Biden pushed for passage of a new COVID-19 aid bill at a news conference in Wilmington Friday. He called today’s jobs report “dire,” and said the aid package can’t wait for his inauguration. He also talked about what his inauguration might look like in wide-ranging remarks.

Biden said he knows people are skeptical when he says he can get bipartisan cooperation, but the $900 million aid package — which he hinted he’d had a hand in — shows Congress can work together.

“But any package passed in a lame duck session is not going to be enough. It’s critical but it’s just a start,” Biden said.

The president-elect said he’d be asking for funding for testing, vaccines and economic relief to get the country through 2021.

In response to questions, he said he didn’t think the vaccine should be mandatory but that the public would have confidence in getting it when they saw him and, he said, three former presidents getting it.

He said his 100 days of mask wearing wouldn’t be mandatory either, just a patriotic request in his inaugural speech, which he said would not look like past inaugurations. 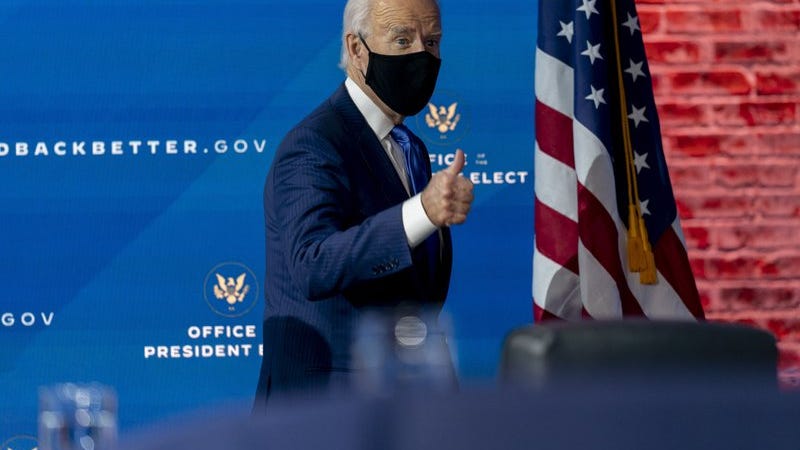 Among first acts, Biden to call for 100 days of mask-wearing

“First and foremost, we’re going to follow again the science and recommendations of the experts on keeping people safe, so it’s highly unlikely there’ll be a million people on the mall going all the way down to the Memorial,” he said.

He also pretty much ruled out a parade but said he thinks it’s important to celebrate and that the event might be more like the Democratic National Convention, which was almost fully virtual.