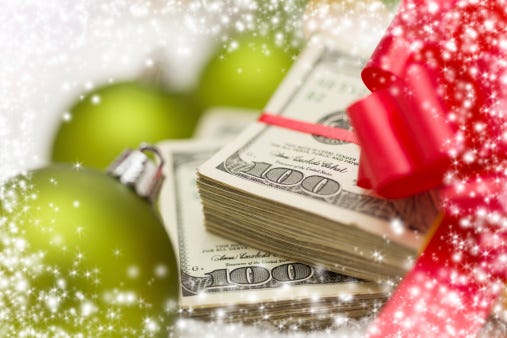 Christmas came early for the employees of St. John’s Properties.

It’s our honor to publicly announce that a $10 mil bonus will be paid to all SJP employees in celebration of achieving our goal of developing 20 mil SF of CRE space! We are thankful for each of our employees, and thrilled to reward them in such a big way! https://t.co/EhfuulmVoG pic.twitter.com/pdw3zH6DbF

All the employees opened red envelopes at the same time which contained the amount of their individual bonuses. The size of their check was determined by their years of service with the organization.

While the largest bonus given out was $270,000, the average came to an impressive $50,000. An employee that was set to start their first day with the company on the Monday after the party received the smallest amount, $100.

The founder was motivated to gift the generous amount to his staff after the company achieved its longtime goal of developing 20 million square feet of office space across eight states.

“To celebrate the achievement of our goal, we wanted to reward our employees in a big way that would make a significant impact on their lives,” said St. John. “I am thankful for every one of our employees for their hard work and dedication. I couldn’t think of a better way to show it.”

Naturally, the 198 employees were overcome with shock, excitement and gratitude after receiving the unexpected checks from their real life Santa Claus.

In a clip released by the company, elated employees of St. John’s Properties called the surprise cash everything from “magical” to “life-changing.”

The firm also provided airfare and hotel accommodations so that employees located in other states could attend the party, which was held near the company’s Baltimore headquarters.

In addition to the holiday party bonus, staff will also get their regular yearly bonus and their profit-sharing bonus in the New Year. Are they hiring?

music
Join us Dec. 1 for 'Heroes of New York' a Robin Hood Special
sports
Padres' Tommy Pham sues strip club after he was stabbed during brawl
music
Tyson Ritter on why that new song from The All-American Rejects might be their last
sports
Patrick Mahomes on Tyreek Hill: 'There is no one else like him in NFL'
music
Kate Middleton fans are convinced that she keeps wearing this Gucci blouse backwards
sports
Daniel Jones' hamstring injury not considered season-threatening