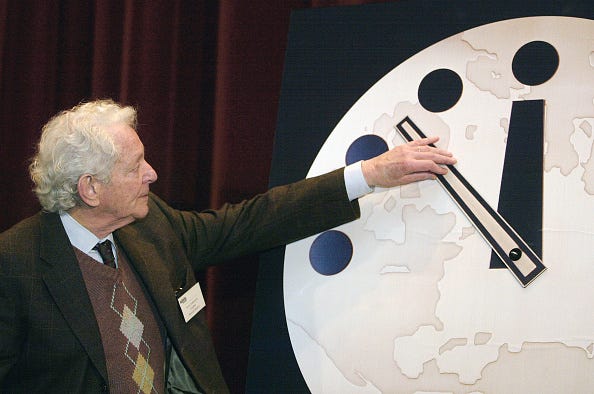 The Doomsday Clock is closer than ever to the destruction hour since its conception in 1947. The clock now reads 100 seconds until “midnight.”

Every year, a nonprofit group that sets the clock (called the Bulletin of the Atomic Scientists) decides how far away we are from destruction according to the events of the past year. The clock aims to “convey how close we are to destroying our civilization with dangerous technologies of our own making,” the group claims.

IT IS 100 SECONDS TO MIDNIGHT. Humanity continues to face two simultaneous existential dangers—nuclear war and climate change—that are compounded by a threat multiplier, cyber-enabled information warfare, that undercuts society’s ability to respond. The international security situation is dire, not just because these threats exist, but because world leaders have allowed the international political infrastructure for managing them to erode. Read the full 2020 Clock statement at the link in our bio.

A post shared by BulletinOfTheAtomicScientists (@bulletinoftheatomicscientists) on Jan 23, 2020 at 7:07am PST

But now, the clock is reading closer than ever to “midnight,” or destruction, as the nonprofit defines it. The closer to midnight, the more danger the world is in. While last year’s reading put us at 2 minutes until midnight, the Doomsday Clock now reads just 100 seconds until hitting the danger zone.

“We are now expressing how close the world is to catastrophe in seconds – not hours or even minutes,” CEO and president of the Bulletin of the Atomic Scientists Rachel Bronson reports. “It is the closest to Doomsday we have ever been in the history of the Doomsday Clock.”

The Bulletin said in a statement, “Humanity continues to face two simultaneous existential dangers – nuclear war and climate change – that are compounded by a threat multiplier, cyber-enabled information warfare, that undercuts society’s ability to respond.”

“Civilization-ending nuclear war – whether started by design, blunder, or simple miscommunication – is a genuine possibility. Climate change that could devastate the planet is undeniably happening,” the statement continues.

The furthest the hands on the clock have been from midnight was 17 minutes after the end of the Cold War in 1991. The hands have been creeping towards midnight ever since.