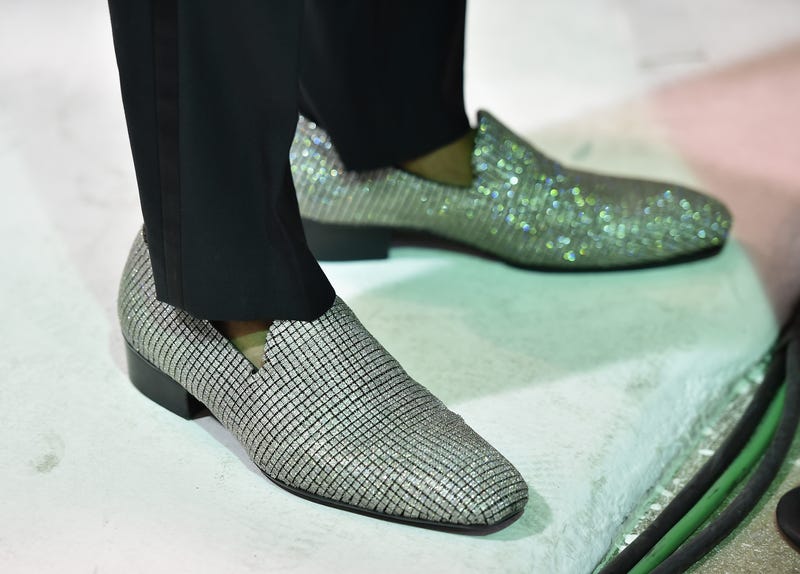 Commissioned by Nick Cannon for the 2014 finale of America’s Got Talent, these star-studded Tom Ford loafers are set...

Cost: $2 million
The most expensive men’s shoes on the market, these glittery custom Tom Ford kicks graced the feet of Nick Cannon on “America’s Got Talent” in 2014. For that wow factor, workers spent over 2,000 hours bedazzling the shoes with 14,000 diamonds. Hope it was worth it, Nick.

Cost: $2 million
This isn’t the last time you’ll see designer Stuart Weitzman on this list. The company produces a number of super-expensive items, including these heels featuring bright blue tanzanite stones. A total of 185 carats of tanzanite help give them a bit of sparkle.

Stuart Weitzman Cinderella Slippers- Price Tag $ 2 million How could the master of shoe snot create something as...

Cost: $2 million
Another pair of ridiculously luxe footwear from Stuart Weitzman, these diamond-covered four-inch heels are total stunners. Over 500 Kwiat diamonds line the shoe’s straps, along with one major 5 carat amaretto diamond smack dab on the front of the right shoe.

Posted by Encyclopedia of facts on Saturday, July 25, 2015

Cost: $3 million
You might spot Princess Yasmin Aga Khan, daughter of the famous Rita Hayworth, wearing these satin heels out and about. The shoes highlight a pair of gemstone-studded earings once worn by the Hollywood icon, tucked into a frilly bed of ultrasoft satin.

Harry Winston Ruby Slippers- Price Tag $ 3 million It boasts of total 4,600 pieces of rubies and worth 50 carats of...

Cost: $3 million
Dorothy could have tapped her way anywhere if her ruby slippers were constructed by luxury designer Harry Winston. Produced for the 50th anniversary of the classic film, these slippers sport 4,600 rubies, as well as 50 carat diamonds.

Cost: $10 million
While you won’t find this shoe at your corner super-luxury department store, it still ranks among the most expensive shoes ever. Iraqi journalist Muntadhar al-Zaidi lobbed the shoe at President Bush during a press conference in 2008. Even though he missed the pres, the shoe later sold for $10 million.

Cost: $15 million
It’s no surprise that Debbie Wingham, the devious mind behind a $17 million dress, devised these ludicrously expensive kicks. The shoes, constructed from platinum, pure gold, and leather, feature rare blue and pink diamonds, giving them a rainbow of textures and colors, apparently worth 15 mill.

Cost: $17 million
Pop 240 diamonds on a pair of stilettos and you pretty quickly jack up the price, especially when two of those diamonds are 15 carat D grade diamonds. These heels, a partnership between Jada Dubai and Passion Diamond, were crafted over nine months from solid gold. They’re shiny and they’re worth a lot of money.