(WWJ) On the eve of Election Day, 2020, Donald Trump mused about the leisurely days before he was president.

"I had a very easy life before this, I have to tell you," said Trump, who was well- known in the U.S. as a New York billionaire, real estate mogul and reality TV star in his pre-POTUS period.

"I had a very easy life; I had a different kind of a life," Trump said. "And, you know, I would not have changed that decision when I said, 'First lady, let's do it. You're gonna be first lady,"

Trump said his wife, Melania asked him if he was sure he wanted to run back in 2016, insisting, "You know you will win if you do it. You must be sure."

Trump said he was certain he was doing the right thing.

"We have to set this nation on the right course," Trump said, garnering cheers from supporters in red MAGA hats who came to see him speak Monday on a cold evening in Traverse City, Michigan.

The crowd -- many attendees in red MAGA hats -- was loud and supportive. They chanted, "We love you," apparently touching Trump.

"Don't make me cry, don't make me cry," Trump told them. "If I started to cry they'd have a big story. They'd say the president broke down and cried, and I don't know if that's good for us... Maybe it brings me up four or five points, but I don't care." 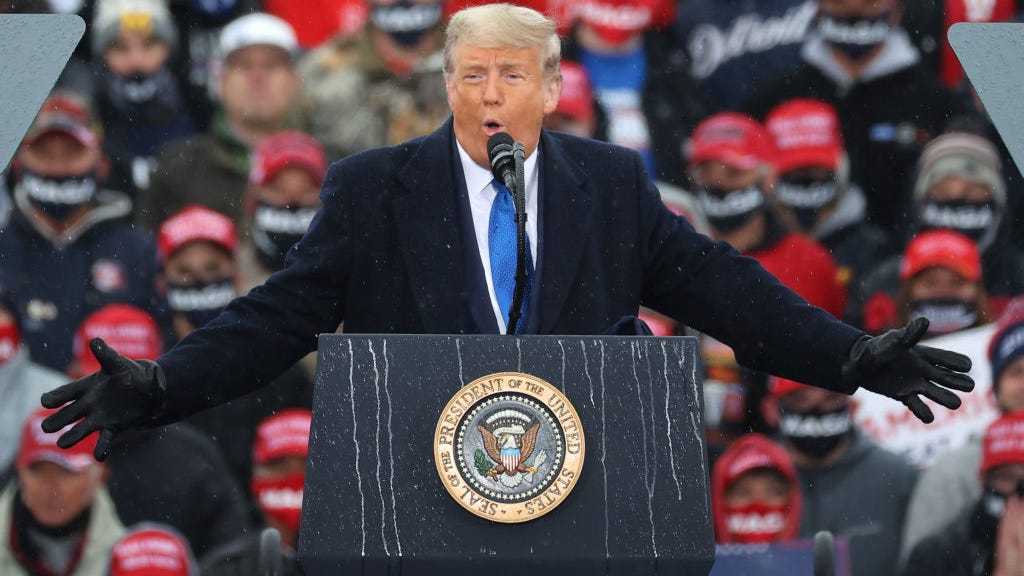 Trump tells Michigan women: 'We're getting your husbands back to work'

Trump spent a big chunk of his time talking about what Democratic rival Joe Biden supposedly will do if he wins on Tuesday; including, Trump asserted, destroying the U.S. automotive industry. The president did not, however, offer facts to back up that claim.

When the crowd chanted, "Drain the swamp!" Trump said he's still working on it.

"That's what we're doing; we're doing it. But when I ran you never told me it was gonna be that deep, that vicious that rough," Trump said.

"That's a deep sucker," he added. "I thought we'd knock it out fast. We went through three and a half years of hell, and here we are, and they're not too happy. They're reeling."

Trump sprinted through five rallies on Monday, finishing in Michigan, where he ended his presidential run on Election Day in 2016. Biden, who was in Michigan with former President Barack Obama on Saturday, devoted the last day of his campaign to Ohio and Pennsylvania.

Trump said Monday he intends to win Michigan, although most polls show him lagging behind Biden in the Great Lakes State. EPIC-MRA's final poll shows Biden with a 7 point lead over Trump in Michigan.