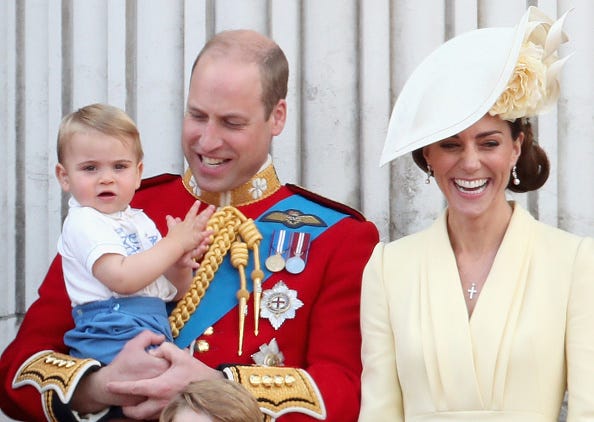 Kate Middleton has revealed her youngest child is already talking and never wants to leave her side.

Kate Middleton Reveals 'Little Louis' Is Talking: 'He Wants to Come Everywhere with Me!' https://t.co/Zjg92IBfuT

The Duchess of Cambridge made the disclosure while helping children pick out Christmas trees at a local farm, when one boisterous little boy caught her attention by raising his hand and exclaiming, “me, me!” reported People.

“You remind me of my little Louis,” Middleton told the youngster while gently touching his cheek.

It was during that same outing that the 37-year-old also dropped some insight into how she’ll be decorating Kensington Palace over the holidays.

Speaking to the owner of the tree farm, Kate said she normally gets a Nordmann Fir because they smell nice and don’t shed their needles.

No doubt if there are any loose needles, little Prince Louis will be quick to point them out to his mom.

Kate and Prince William are expected to spend at least part of the holidays at Sandringham Castle with Queen Elizabeth and other members of the royal family.

Although in previous years, the royal couple has also made time for Kate’s family by enjoying the festive season with them in Berkshire.

It was previously revealed that Prince Harry, Meghan Markle and baby Archie would not be celebrating the holidays with the Queen at Sandringham.

Instead, the Duke and Duchess of Sussex will spend it with Meghan’s mother at an undisclosed location.