Broadcast legend Larry King has died. He was 87.

"With profound sadness, Ora Media announces the death of our co-founder, host, and friend Larry King, who passed away this morning at age 87 at Cedars-Sinai Medical Center in Los Angeles," the statement began.

The cause of death has not been revealed.

The statement went on: "For 63 years an across the platforms of radio, television and digital media, Larry's many thousands of interview, awards, and global acclaim stand as a testament to his unique and lasting talent as a broadcaster. Additionally, while it was his name appearing in the shows' titles, Larry always viewed his interview subjects as the true stars of his programs, and himself as merely an unbiased conduit between the guest and audience. Whether he was interviewing a U.S. president, foreign leader, celebrity, scandal-ridden personage, or an everyman, Larry liked to ask short, direct, and uncomplicated questions. He believed concise questions usually provided the best answers, and he was not wrong in that belief."

LISTEN: Larry King talks the pandemic, family and more on the podcast Story Worthy in April 2020.

"Larry's interview form his 25- year run on CNN's 'Larry King Live,' and his Ora Media programs 'Larry King Now,' and 'Politicking with Larry King' are consistently referenced by media outlets around the world and remain part of the historical record of the late 20th and early 21st centuries," the statement continued. 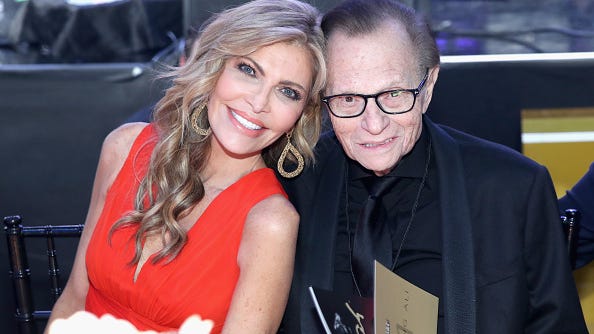 The statement indicated that funeral plans were still being arranged with King's family, "who ask for privacy at this time."

Piers Morgan tweeted a tribute to King on Saturday morning.

Larry King was a hero of mine until we fell out after I replaced him at CNN & he said my show was ‘like watching your mother-in-law go over a cliff in your new Bentley.’ (He married 8 times so a mother-in-law expert) But he was a brilliant broadcaster & masterful TV interviewer. pic.twitter.com/1JsXeeZYEk

"Larry King was a hero of mine until we fell out after I replaced him at CNN & he said my show was ‘like watching your mother-in-law go over a cliff in your new Bentley.’ (He married 8 times so a mother-in-law expert) But he was a brilliant broadcaster & masterful TV interviewer," Morgan captioned a photo of the two.

Earlier this month, King was hospitalized for COVID-19, landing in the intensive care unit. Days later, his son, Larry King, Jr., 59, said his father "is receiving great medical care from his doctors, who plan to keep him under observation for the time being."

The younger King added, "My brothers and I stay in touch with him via video calls on a daily basis. He is very appreciative of all the people around the world wishing him well and he looks forward to being home soon."

From 1985 to 2010, King hosted "Larry King Live" on CNN. The show began broadcasting out of Washington, and eventually relocated to Los Angeles, at which point it expanded beyond politics and into breaking celebrity news.

King conducted more than 50,000 interviews over the course of his career.

He had a penchant for disarming interviews that put guests at ease and made King personable to viewers.

“I don’t pretend to know it all,” he told the Associated Press in an interview in 1995. “Not, `What about Geneva or Cuba?′ I ask, `Mr. President, what don’t you like about this job?′ Or `What’s the biggest mistake you made?′ That’s fascinating.”

In August 2020, King confirmed the deaths of two of his children, son Andy King, 65, and daughter Chaia King, 51. The two passed away within a month of each other. "It is with sadness and a father's broken heart that I confirm the recent loss of two of my children, Andy King, and Chaia King. Both of them were good and kind souls and they will be greatly missed," King wrote in a Facebook post. "Andy passed away unexpectedly of a heart attack on July 28th, and Chaia passed on August 20th, only a short time after having been diagnosed with lung cancer."