It's McRib season! McDonald's is bringing back the McRib sandwich, and this time, it's going nationwide!

On December 2, the iconic pork sandwich will be available for a limited-time at more than 14,400 of the chain's U.S. restaurants for the first time in nearly a decade, per CNN.

"good morning to everyone who asked how i was doing last week and to everyone else...McRib is back 12.2," the chain tweeted.

McDonald's also announced it is giving away 10,000 free McRib sandwiches. All you have to do is post a clean-shaven selfie on Twitter tagging #shave4mcribsweepstakes and @McDonalds!

k giving them away only IF you shave bc beards + McRib sauce don’t mix. post ur clean-shaven selfie on ur public profile with #shave4mcribsweepstakes and @mcdonalds. ​
First 10,000 could get a free McRib via @ubereats.​
​
ends 12/2. 50 US/DC 18+. rules at https://t.co/nsblLbdMHw https://t.co/RlrQ4My1Tx

In previous years, the McRib was only sold at certain locations prompting long lines, which should be avoided in light of the coronavirus pandemic.

The 480-calorie boneless barbecue beaut, which consists of a pork patty shaped like a rack of ribs and doused in barbecue sauce, is described as "saucy, tangy, tender and shamelessly delicious."

“The McRib has been a beloved menu item at McDonald’s since its inception nearly 40 years ago,” said Vice President of Menu Innovation, Linda VanGosen in a press release. “There’s nothing quite like the taste of the McRib. To our customers, it’s become more than a delicious, saucy moment… it’s a season, and it’s taking the internet by storm. That’s why this year, we’re proud to serve the McRib nationwide for everyone to enjoy.”

Originally launched in 1982, the McRib sold poorly and was pulled off the menu four years later. Over the years it has been reintroduced as a seasonal item which has helped to further its cult status and increase sales during the annual promotion. Pumpkin Spice Latte say what?! 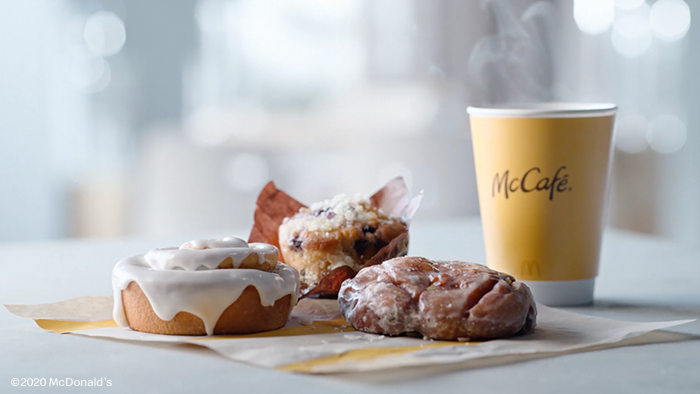 Die-hard fans looking to enjoy the pork delicacy year-round may want to take a trip to Germany or Luxembourg as the McRib remains a permanent menu item in both countries.

For the time being, Americans from coast-to-coast can find common ground by coming together as one to enjoy the McRib in all of its gastronomical glory.