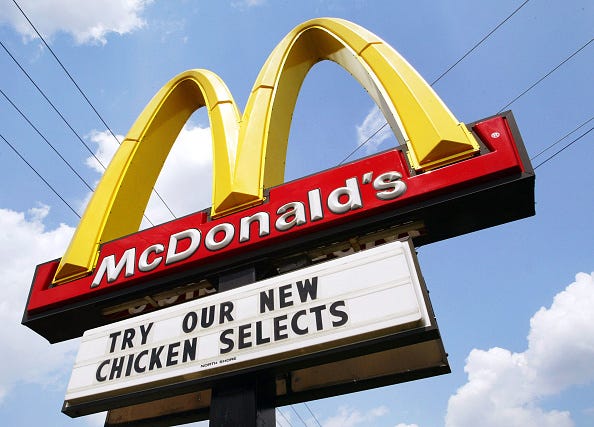 Not even your first meal of the day is safe from the chicken sandwich wars.

McDonald’s is getting ready to add not one, but two chicken sandwiches to their breakfast menu in 2020.

Leaked documents reveal McDonald's is rolling out the McChicken Biscuit and Chicken McGriddle nationally in January, as fast-food's breakfast wars heat up https://t.co/PmiWoBJpKp

The fast-food chain will launch its McChicken Biscuit and Chicken McGriddle across the US in late January, according to Business Insider.

In addition, some undisclosed parts of the country will also get spicy chicken versions of the sandwiches to give their morning routines an extra kick.

Although the exact specifics of each sandwich were not released, fans can expect the Chicken McGriddle to include the beloved breaded chicken patties on maple-flavored pancake buns. While the McChicken Biscuit is simply the same patties but inside a buttery biscuit.

"What came first, the chicken or the egg?” the company said in a statement. “Set your alarm for more reasons to visit McDonald's for breakfast in 2020."

The top-rated chain has been ramping up their menu in recent weeks partly in response to the heated rivalry between Popeyes and Chick-fil-A.

Earlier this month, the burger giant announced they were getting into the chicken sandwich wars by launching their new Crispy Chicken Sandwich in Houston and Knoxville, with a possible nationwide launch in the near future.

And while the Chicken McGriddle and the McChicken Biscuit will give customers even more poultry to choose from, it’s also proof of their drive to make breakfast the new battleground.

Wendy’s previously disclosed they were finally getting into the early morning game by launching a new nationwide breakfast menu, which will include its delectable Honey Butter Chicken Biscuit, in early 2020.

And earlier this week, Taco Bell committed to giving customers even more bang for their buck by revealing they would be offering 21 new items on their $1 menu, which will include breakfast items.

With some many options for breakfast, lunch or dinner, it looks like the real winner of the chicken sandwich wars are the customers.