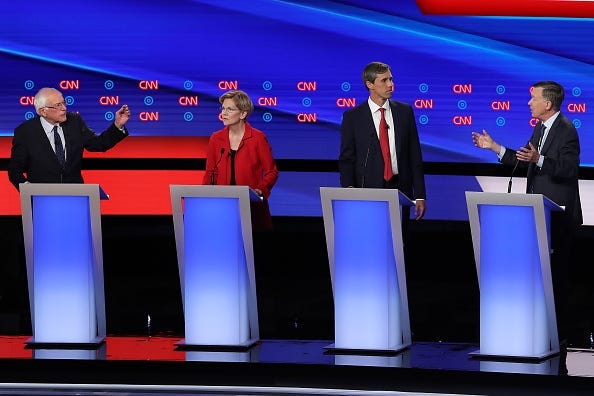 1. Warren Dominates Time
Elizabeth Warren had the most speaking time of the debate, with Bernie Sanders following close behind, according to CNN.

2. Marianne Williamson
She may not have spoken as much as Warren or Sanders, but Marianne Williamson often stole the show with her remarks, namely about the Flint water crisis and calling out President Trump for his “dark, psychic force of collectivized hatred.”

3. Medicare for All Fight
With Sanders and Warren emerging as staunch supporters of Medicare for all, the other candidates went on the offensive. Sanders appeared to lose his cool when Rep. Tim Ryan suggested Sanders had no idea whether his health care plan would lead to better coverage.

4. Ryan Falters
Speaking of Ryan, the Ohio congressman basically lost the audience from the jump, from failing to put his hand over his heart during the national anthem to getting shut down by Bernie Sanders over Medicare for all.

6. Buttigieg Calls Out Congress
Perhaps the most stirring monologue of the night came when Mayor Pete Buttigieg addressed Republican members of Congress, saying, “Consider the fact that when the sun sets on your career and they are writing your story of all the good and bad things you did in your life, the thing you will be remembered for was whether in this moment with this president that you found the courage to stand up to him, or you continued to put party over country.”