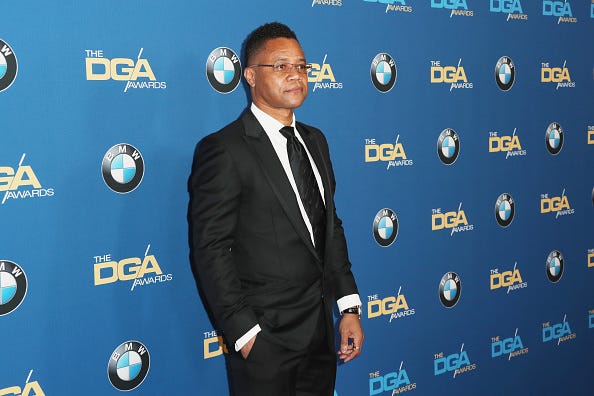 After a judge denied a request to drop the sexual abuse charges against Cuba Gooding Jr., the actor’s lawyer decided to launch the #NotMe Movement, according to Page Six.

The Oscar winner has been accused of squeezing the breasts of a 30-year-old at a NYC bar on June 9th.

While Gooding pled not guilty to the charge of forcible touching and was released on his own recognizance, the “Jerry Maguire” star’s lawyer petitioned to have the case dropped.

On Wednesday, Manhattan Criminal Court Judge Phyllis Chu denied the request saying, “The court finds the defendant has failed to meet his burden of setting forth compelling reasons to warrant dismissal.”

Shortly after her decision, Gooding’s attorney spoke out announcing the hashtag, which clearly is attempting to be a response to the powerful anti-sexual assault #MeToo movement.

“After fifty years of defending innocent, falsely accused and unfairly prosecuted defendants, I am igniting the ‘Not Me Movement’ (#NotMe),” said attorney Mark Heller.

“I am totally confident that when a jury of Cuba Gooding, Jr.’s peers assess all of the exculpatory evidence in this case, that he will be totally exonerated. His case will be a hallmark example for the #NotMe Movement.”

Gooding’s lawyer appears to be taking a page from music mogul Russell Simmons, who attempted to start #NotMe after he was accused by over 10 women of sexual assault, harassment and rape.

“My intention is not to diminish the #MeToo movement in anyway, but instead hold my accusers accountable,” Simmons wrote in a since deleted Instagram post. “#NotMe Again, this is not a movement against or even in conjunction with #MeToo. It’s just a statement about my innocence.”

His post is what prompted fashion publicist Kelly Cutrone to reveal Williams allegedly attempted to rape her in 1991.

The following month, Simmons halted the #NotMe movement because he felt now was “a time for women to speak,” his reps said.