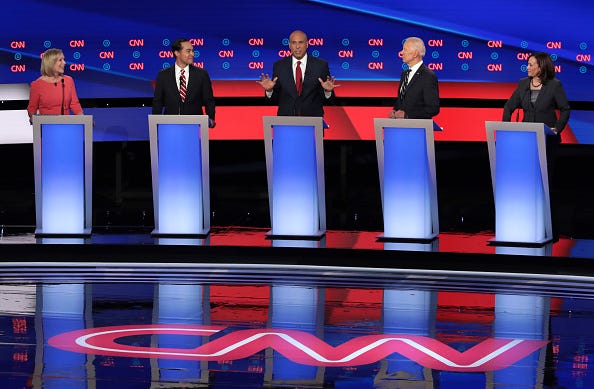 Here are some of the highlights from Wednesday night’s Democratic debate:

1. More Joe Gaffe Woes
Those anticipating a Joe Biden slip-up didn’t have to wait long. It began with introductions, when he asked Kamala Harris to “go easy on me, kid,” drawing backlash for what many saw as a condescending attitude toward a female opponent. He referred to Cory Booker as “the future president.” And he left audiences puzzled during his closing statement when he cautioned against “eight more years of Donald Trump” and the perplexing “Joe 30330.”

2. Ganging Up on Biden
The former vice president was widely attacked by fellow Dems at the last debate, and Wednesday night was no different. This time, however, he deployed a much more effective defense as he defended his record and called attacks against Obamacare “malarkey.”

3. De Blasio’s Demands
The New York City mayor, in a battle to stay relevant in a tough Democratic field, came out swinging early when he promised to “tax the hell out of the wealthy.” He stood by the rallying cry to the point where TaxTheHell.com now opens a de Blasio donation site. However, his attempts to attack Biden and defense to criticism on the Eric Garner case fell flat.

4. Hecklers Get a Word In
Hecklers may have been absent the night before, but they came out in force on Night 2. They interrupted the action on several occasions, shouting “Fire Pantaleo,” a reference to the police officer in the Eric Garner case, and “3 million deportations,” a jab at the Obama administration’s immigration policies. They were eventually removed from the venue.

5. Booker’s One-Liners
Cory Booker took a much more aggressive approach to the Wednesday night debate. During a heated exchange about Biden’s criminal justice record, Booker said “You’re dipping into the Kool-Aid and you don’t even know the flavor.” Booker also slipped under the CNN censors when he mentioned “s—thole countries,” a reference to a remark President Trump reportedly made during a White House meeting on immigration.

6. Yang ‘Reality Show’
While Andrew Yang didn’t get the most speaking time in comparison to other Democratic hopefuls, he delivered a stirring closing statement in which he blasted the “talking heads” for caring more about his ties, makeup, pre-rehearsed statements and a “reality show” mentality that got President Trump elected in the first place.