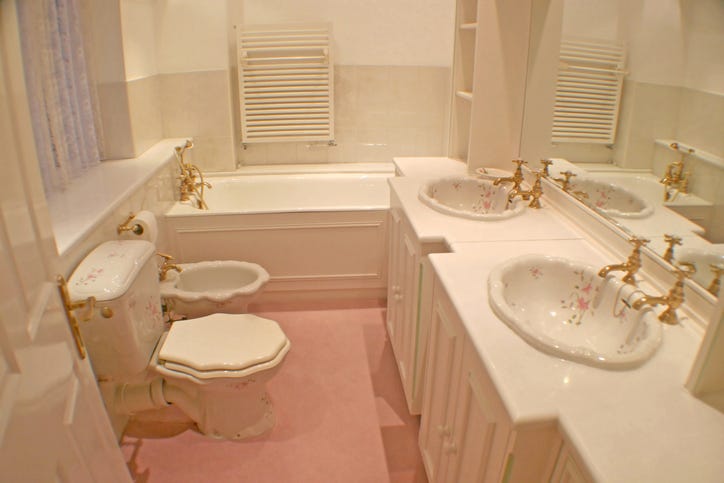 Just when you thought it was safe to use the toilet!

A woman, who was shocked and awed to find her grandmother-in-law's home had a wall-to-wall carpeted bathroom, turned to the Internet to ask if it’s hygienic, reported the Daily Mail.

The woman shared an image of the room in question to Reddit with the caption:“At grandma's for the weekend. Her bathrooms are carpeted.”

It didn’t’ take long for people to respond and weigh in on the bathroom’s cleanliness and peculiar decorating style.

“I for one would not go in there without shoes on,” one person wrote.

“I can’t stand carpet in any form because you can never ever keep it really clean, having a carpet in a bathroom is an absolute nightmare,” added another.

While a third didn’t mince words about their distaste by simply writing, “Eeeewwww.”

But some downplayed the outrage and found nothing peculiar about having a carpeted bathroom.

“It’s not a big deal. My parents’ house has carpet in the bathroom,” one confessed.

Another chimed in saying, “Lots of older houses have this. I've seen it mostly in houses that have a pool.”

Regardless of your personal taste, carpeted bathrooms have advantages and disadvantages.

According to the International Association of Certified Home Inspectors (IACHI), carpet can make the bathroom seem warmer and may be more comfortable on bare feet than tile. It also makes it less likely to slip and fall, which is of particular importance for the elderly.

The biggest negative, besides aesthetics, is that moisture can get under the rug and lead to mold. In addition to possible health issues, the mold can decay the floor underneath the carpet.

There’s also the chance that bacteria will accumulate in the carpeted area surrounding the toilet.

While all that may sound gross, if you do choose to have a carpeted bathroom the IACHI advises people to be vigilant about keeping it clean and dry and to install a bathroom fan.