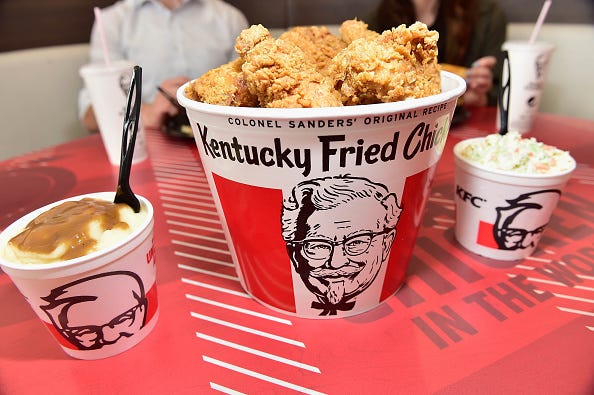 Say ‘I do’ to Colonel Sanders!

KFC is going to give some lucky lovebirds the finger-lickin’ good wedding of their dreams.

The fast food chain has announced they will organize and pay for chicken-themed weddings for six hungry couples who are planning to wed between November 2019 – May 2020, according to the New York Post.

Included in the extra-crispy wedding package are a KFC photo booth, custom KFC buckets, musical entertainment and a KFC-themed officiant, which sounds like veiled code for Colonel Sanders. Fingers crossed!

As far as food, up to 200 of your guests will gorge on tons of freshly cooked KFC chicken with all the fixings delivered via a KFC food truck.

“If you can’t think of anything more romantic than sharing a bucket of the Colonel's finest with your one true love, then get ready to say Bucket. Why not? to a KFC Wedding,” the company said on its website.

Things not covered in your KFC wedding reception are the venue, transportation, invitations and alcohol. BYOB!

This is not a drill! KFC Australia is giving 6 fried chicken loving couples the opportunity to unite their love for chicken and each other. If you and your partner love KFC, then ’put a wing on it’. It’ll truly be love at first bite. https://www.kfc.com.au/weddings #wedding #Australia #bucketoflove

As to why they’re getting into the wedding business, KFC says because people have been doing it for years without their help.

“KFC Weddings is our response to all the couples we’ve heard of who have popped the question in one of our restaurants or who have created their own version of a KFC Wedding,” the site added.

“And with so many people wanting us to be part of their big day we just had to create KFC Weddings as a service for all couples ready to tie the knot. “

To apply for this cluckin’ awesome deal, couples have to be 18 and over, be ready to tie the knot by May 2020 and, here’s the catch, be a resident of Australia. Yep, sadly it’s not open to Americans.

To everyone Down Under, you have until October 18th to fill out an online form and describe why you’re hungry for a KFC-themed wedding.