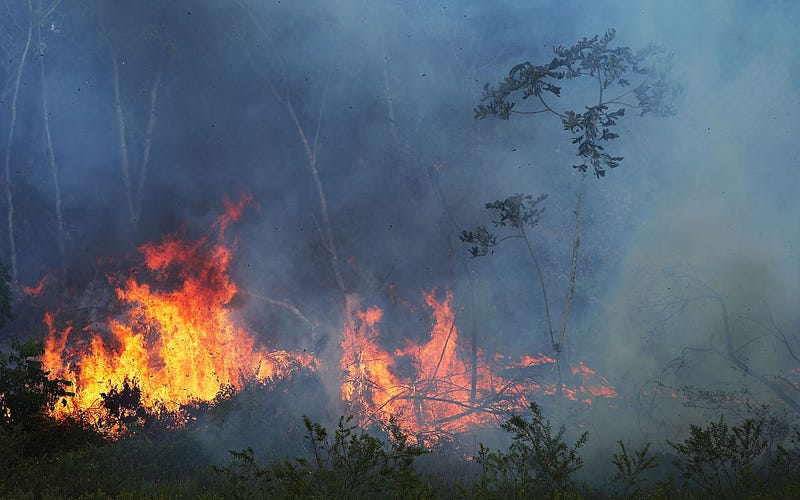 Brazil’s Amazon rainforest is experiencing record-breaking fires, and scientists are warning about what this could mean for climate change.

According to CNN, fires in the Amazon have been tracked by the National Institute for Space Research (INPE) since 2013 and are now burning at the highest rates since then.

The fires mark an 80% increase in Brazilian burns this year, with 72,843 fires total and more than half of those fires taking place in the country’s Amazon region. This is a shocking statistic for many, considering the Amazon contributes 20% of the oxygen to the earth’s atmosphere.

Smoke from the fires is reaching cities thousands of kilometers away, darkening skies in the middle of the afternoon.

🌎Just a little alert to the world: the sky randomly turned dark today in São Paulo, and meteorologists believe it’s smoke from the fires burning *thousands* of kilometers away, in Rondônia or Paraguay. Imagine how much has to be burning to create that much smoke(!). SOS🌎 pic.twitter.com/P1DrCzQO6x

Satellite maps show that black smoke is covering nearly half of Brazil and spilling into the neighboring areas of Peru, Bolivia, and Paraguay.

From the other side of Earth, here’s the latest on the Amazonia fires 🌳

The INPE reports that more than a soccer field and a half of the rainforest is destroyed every minute.

The Amazon rainforest plays a huge part in slowing the effects of global warming and is home to innumerable species of plant and animal life.

CNN reports that environmentalist groups are putting Brazilian president Jair Bolsonaro under fire for “relaxing environmental controls in the country and encouraging deforestation.” These same groups are urging him to let go of his “pro-business” ways in an effort to encourage him to implement more environmentally conscious policies.

Environmentalist groups also point out the part human consumption has to play in the fires as they urge people all over the world to practice more caution when it comes to recycling, meat consumption, and water use.