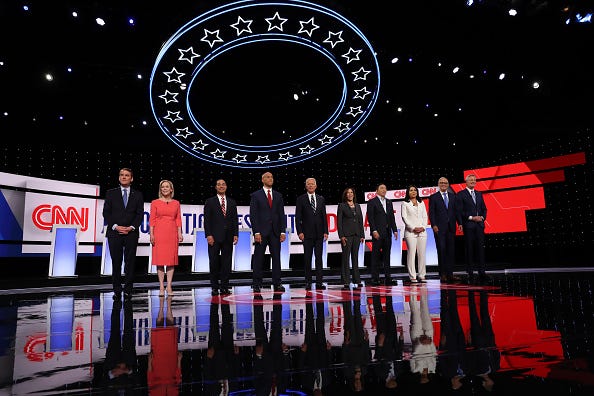 ﻿You can listen to the Democratic presidential debate live here.

Night two of the Democratic debates is upon us, and viewers are wondering what they can expect compared to last night’s conversations.

While Tuesday night’s session was dominated by Bernie Sanders and Elizabeth Warren, viewers of Wednesday night’s session can expect Joe Biden and Kamala Harris to take the lead a bit. Where Warren and Sanders found a lot of common ground, Biden will likely challenge many of Harris’ main points.

Biden and Harris went head to head in the first debate, when Harris challenged Biden’s record on busing, and Biden’s response was ill-received. This will likely be Biden’s chance to redeem himself.

Biden remains at the head of the polls, despite stumbling some through the last round of debates. It’s clear that Biden has some wiggle room with the debates while still being able to maintain his frontrunner status, but Harris will likely come prepared for battle.

Considering Biden’s performance in the last debate, viewers are expecting that other politicians onstage will be prepared to go for his weak spot, with Booker openly planning on questioning Biden’s record on criminal justice, Vox reports.

Wednesday night’s debate will be the final of the larger-scale sessions. The third round of debates, slated for September, will show a much tougher qualification process.

Candidates will have to hit two percent or more in at least four different polls and have 130,000 unique donors.

The second night of debates begins on Wednesday at 8 p.m. EDT in Detroit.