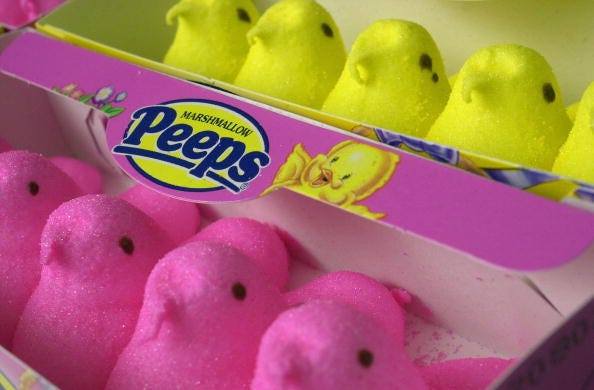 Spring has arrived - well, at least in your morning cup of joe.

Easter might not be until April, but you don’t have to wait that long to get your Peeps fix. Peeps creamer, inspired by the most divisive and polarizing candy in the world, has found its way back onto store shelves!

And yes, we're aware that it’s only the middle of January.

If you’ve been looking for something to get your daily coffee routine out of that post-holiday slump, the International Delights creamer is just the thing.

A listing on the brand's website describes the creamer – which comes in a colorful bottle adorned with marshmallow bunnies and chickies of all sizes – as “sweet, marshmallow-y and yellow.”

The yellow refers to the color of the actual creamer.

While there is no official list of retailers currently carrying the creamer, Instagram user @Seasonalsweets snagged a picture of it and described it as the “same as last year, basically just liquid sugar goodness.”

Currently, the product is listed on the Target and Walmart websites, but it is "out of stock" at both retailers.

Keep your eyes peeled for the Easter Bunny to stock up a store near you!