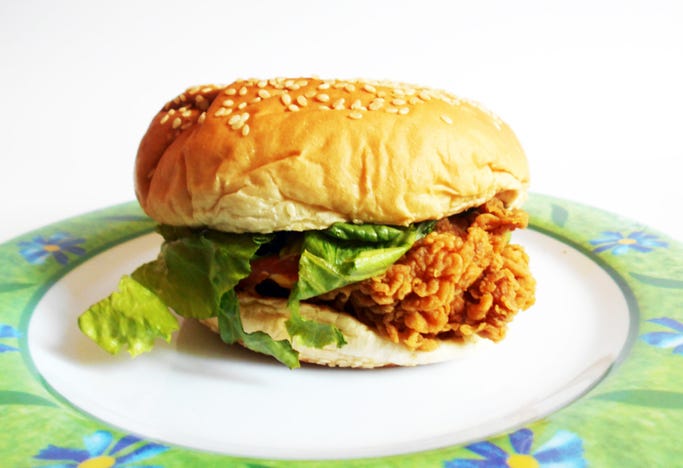 Popeyes’ Fried Chicken sandwich is so good that it’s now being considered a work of art.

After a banana duct-taped to a wall sold for $120,000 at Art Basel in Miami, the fast-food chain figured they get into the action by offering up their own tasty version for the six-figure price, reported the New York Post.

Don’t eat the art. Even though it’s delicious. Go see our masterpiece “The Sandwich” at @Sanpaulgallery for #ArtBasel.

The delicious pièce de résistance is entitled “The Sandwich” and is being offered for the reasonable price of $120,003.99. Basically the amount of what the banana went for plus the actual price of the sandwich.

“Go see our masterpiece 'The Sandwich' at @Sanpaulgallery for #ArtBasel.”

While its all done in good fun and to capitalize on a viral stunt, if the exorbitant chicken art actual gets sold, any proceeds will go towards the company’s nonprofit Popeyes Foundation, which helps communities with food and support in times of need.

Last week, Italian artist Maurizio Cattelan duct-taped a banana to a wall, called it “The Comedian” and sold it for $120K at the Miami art fair known as Art Basel.

A few days later, performance artist David Datuna pulled it off the wall and actually ate it in front of a convention full of art lovers. But all was not lost, as a replacement banana was later re-affixed to the wall. Good art is forever.

Demand for Popeyes Fried Chicken Sandwich hit feverish levels upon its release and saw the chain briefly sell out of them across the country this summer.

After reintroducing the highly-coveted menu item in November, customers have waited in long lines and even gotten into several physical altercations in order to get their hands on them.

While there doesn’t seem to be a high demand for the six-figure version, the chain claims at least one person had inquired about actually buying “The Sandwich.”

No word if Chick-fil-A or McDonald’s plan on creating gallery-worthy fried poultry treats of their own too.