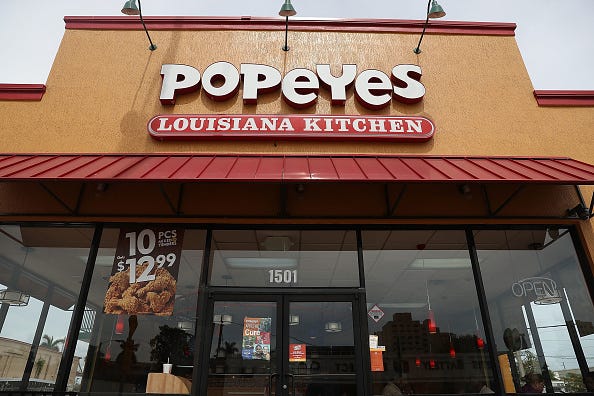 Now you can snuggle up with Popeyes fried chicken sandwiches.

The fast-food chain is looking to warm up customers over the holidays with more than just their culinary treats and has begun selling a chicken sandwich-themed ugly Christmas sweater, reported CNN.

That's right. A Popeyes holiday sweater exists now, and it's bestrewn with stitched sandwiches, though as far as ugly Christmas sweaters go, this one is fairly tame. https://t.co/03jtPINV9S

The delicious fashion statement features the brand’s popular menu item alongside snowflakes and Christmas trees and retails for $44.95.

“With the Popeyes Chicken Sandwich becoming a household favorite and pop culture phenomenon this year, the team at UglyChristmasSweater.com partnered with the beloved Cajun brand to create a holiday festive look sure to make mouths water,” a description of the 55% cotton/ 45% acrylic festive garb said on the website.

The unisex sweater comes in sizes small to 3XL and is able to be delivered by December 20th, just in time for your Aunt Linda’s ugly Christmas sweater party.

But poultry-loving fashionistas shouldn’t hesitate, as it’s expected to sell-out.

The sweater’s release comes just days after Popeyes tried to convert one of their highly-coveted chicken sandwiches into a work of art by slapping it to a wall with duct-tape and charging $120,003.99 for it at Art Basel in Miami.

While no one purchased it, the stunt was in response to an Italian artist selling a banana duct-taped to a wall for $120K at the prestigious art fair earlier in the week.

Popeyes ignited what’s been dubbed the Chicken Sandwich Wars after launching their now-iconic sandwich this summer in direct competition with Chick-fil-A.

Since then even McDonald’s has jumped into the fray by testing its new Crispy Chicken Sandwich in Knoxville and Houston, with a possible nationwide rollout next year.