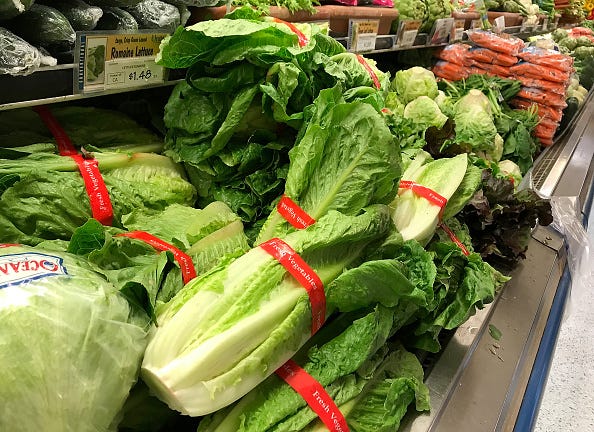 If you’re hosting Thanksgiving dinner this year, it's no secret that you want everything to go perfectly.

Well, this is the time to give your pantry and fridge a quick once-over to make sure that you’re not serving anything that has been recalled by federal health officials.

There have been several notable recalls in recent weeks that warn of foods contaminated with E.Coli, plastic, and more.

From concerns over plastic pieces to possible E. coli and hepatitis A exposure, these are the recalled foods to keep away from your holiday table https://t.co/hYBFq8QWnS

Check out the list below and make sure your food passes the test this holiday season!

Romaine hasn’t been having a good year, and it's going to go out on a sour note. An E.coli outbreak of romaine lettuce from Salinas, California led to 40 people falling ill across 16 states, reported CNN.

Centers for Disease Control and Prevention warned about the E. Coli outbreak connected to romaine sold or harvested in Salinas, a town near San Jose. A second outbreak was reported in eight states: Arizona, California, Colorado, Idaho, Maryland, Montana, Washington and Wisconsin. This includes heads, hearts, and pre-cut salad mixes.

This is an official order: no salad shall be served at Thanksgiving dinner.

If you're looking for a meat other than turkey, you should probably bypass the pork.

More than half a million pounds of pork products have been recalled in Illinois due to a lack of inspection. Items affected include pork loin, pork back ribs and pork chops produced between Nov. 25, 2017 and Nov. 9, 2019. Looks like your Honeybaked ham is safe!

Over 2,000 crates of McIntosh, Honeycrisp, Jonathan, Fuji, Jonamac and Red Delicious apples from North Bay Produce in Michigan were recalled as they may contain a bacterium that could cause Listeria.

The apples were shipped to Michigan, Louisiana, Florida, Texas, North Carolina, Kentucky, Illinois and Wisconsin between October 16th and 21st. If in doubt, stick to the pumpkin pie.

Select boxes of Nabisco's cheese crackers are being voluntarily recalled because they may by contaminated with small plastic pieces. The boxes affected were 11 ounces and have a "best by" date of May 18, 19 or 20, 2020. As of yet, no illnesses or injuries have been reported from coming into contact with the plastic pieces.

If you plan on making any desserts using cottage cheese, well, don’t. About 9,500 cases of the dairy product have been recalled after a customer found red plastic in a container.

Three types of Breakstone’s cottage cheese are being recalled: the 2% low-fat large and small cottage cheese along with the large curd 4% Milkfat Cottage Cheese. All have the use-by date of December 10, 2019.

Any desserts you’re making this holiday season should steer clear of fresh blackberries as they’re tied to an outbreak of hepatitis A in Indiana, Nebraska, and Wisconsin. The infected ones were from the Illinois-based Fresh Thyme chain of grocery stores.

Frozen berries aren't any better than fresh ones. Aldi's frozen raspberries and berry mixes were recalled out of "caution" due to possible Hepatitis A.

No cookie-dough this holiday season. The ready-to-bake refrigerated cookie dough was recalled over possible rubber contamination.