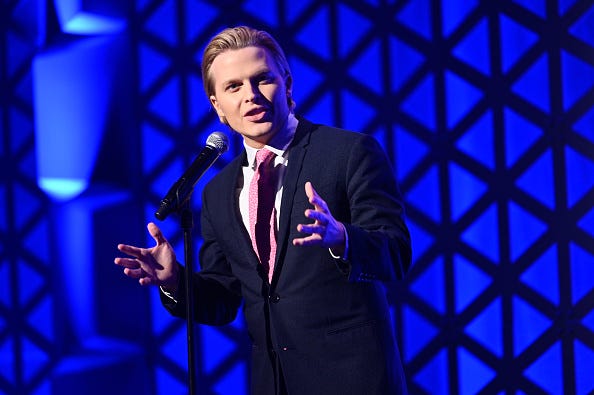 Pulitzer Prize-winning journalist, author, and podcast host Ronan Farrow spoke at The Hollywood Reporter’s Power 100 Women in Entertainment event presented by Lifetime on Wednesday where he credited his mother and sister for the person he is.

Farrow is the award-winning author behind the Pineapple Street Studios and RADIO.COM podcast, "To Catch and Kill," and the book by the same name, in which Farrow exposes Harvey Weinstein and other “powerful and dangerous men.”

While accepting THR’s Equity and Entertainment Award, Farrow said, “I’m the person I am because of two brave women in my life, my mother Mia and my sister Dylan.” He goes on to say they were both subjected to the very system that Farrow aims to take down in his investigations.

“They faced the same system that protects powerful and dangerous men, and in so many ways, my mother was so alone in that fight,” Farrow continued.

According to The Hollywood Reporter, it was in the 1990s that Dylan Farrow accused her adopted father, Woody Allen, of molesting her when she was a child. And while the stories of victims that Farrow tells are heartbreaking, it’s comforting to know that “fewer women have to face these fights alone.”

He then goes on to credit the women he’s worked with in his journalistic career for giving him the opportunity to accept such an award. “In all seriousness, any award I’ve gotten, it’s because of brave women who were sources in my reporting,” he said.

The podcaster concluded his speech by saying, “As a man on this stage I’m well aware of the importance of shutting up and listening.”

For more from Ronan Farrow, listen to his podcast, “The Catch and Kill Podcast with Ronan Farrow” on the RADIO.COM app.