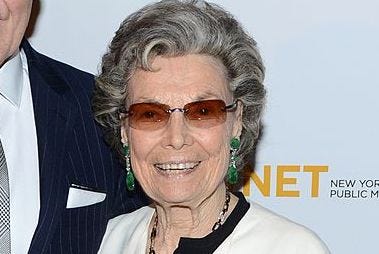 Rosalind P. Walter, the first “Rosie the Riveter,” has passed away at the age of 95. She died at her home in Manhattan, according to friend Richard Somerset-Ward.

Walter coined the name “Rosie the Riveter” during World War II when she chose to work on an assembly line, driving rivets in the metal bodies of Corsair fighter planes at a plant in Connecticut to help aid troops. This was a job primarily reserved for men, The New York Times reports.

Shortly after beginning this job, she was seen as an icon for women everywhere who were joining the workforce to help war efforts, keeping military factories afloat. A newspaper column about her work quickly gained the attention of men and women everywhere as she became a symbol for the working woman.

Other women then went on to model for Rosie posters after her.

In dedicating her time to aid with war efforts, Walter sacrificed an opportunity to attend university, a gap she filled by having her hand in public television documentaries and other programs.

Along with her successes as “Rosie,” Walter was a philanthropist and one of PBS’s principal benefactors with her name on the works of “American Masters,” “PBS Newshour,” “Nature,” and other documentaries by Ken and Ric Burns.

“She cared deeply about the public being informed and felt that public television and media is the best way to accomplish this,” said Allison Fox, senior director for major gifts at WNET.

Walter was born in Brooklyn and hailed from Long Island for most of her life.