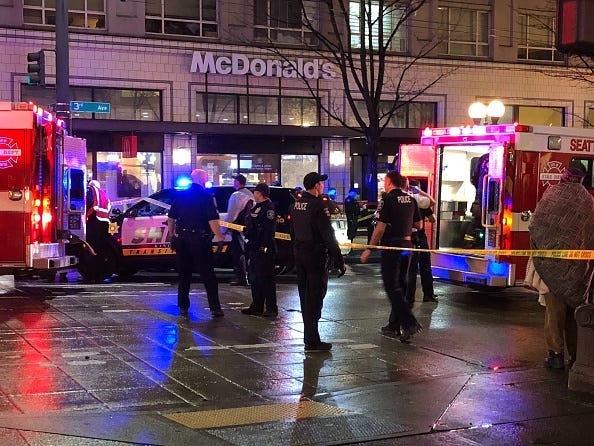 A shooting in downtown Seattle left one victim dead and at least 7 others critically wounded on Wednesday night, according to authorities.

Gunshots rang out around 5 p.m., in a location less than a half-mile from a separate officer-involved shooting that occurred hours earlier, reports Fox News.

One of those injured was a 9-year-old boy, who was in serious condition.

Officers investigating shooting near 4th and Pine. Multiple victims. The suspect has fled, and police are searching for him. Officers and medics are providing first aid to the injured. Additional information to come.

Police were searching for at least one victim who ran from the scene.

The shooting happened near 4th and Pine during rush hour.

Detectives are investigating after six people were wounded by gunfire, one fatally, at 3rd and Pine. The suspect(s) fled the scene. If you have information about this incident, please call our tip line at (206) 233-5000

Fox reports three men, ages 21, 34, and 35 were listed in stable condition. Another woman, 55, was in critical condition.

It was unclear what led to the shooting.