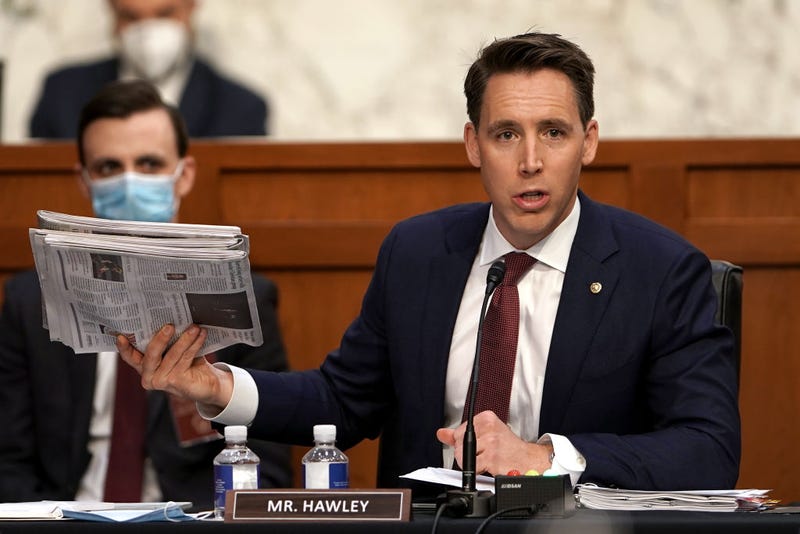 U.S. Senator Josh Hawley, a Republican from Missouri, was among those who made fiery statements during the opening statements of Judge Amy Coney Barrett's confirmation hearing on Monday.

He says Democrats are trying to use Barrett's Catholic religion against her.

"This pattern and practice of religious bigotry, because that's what it is when you tell somebody they are too Catholic to be on the bench. When you say they will be a Catholic judge, not an American judge, that is bigotry," Hawley said. "The practice of bigotry from members of this committee must stop and I would expect that it be renounced."

Sen. Hawley: "The pattern and practice of bigotry from members of this committee must stop." #ConfirmACB pic.twitter.com/85Cs9M67n5

Although Barrett's religion was talked about in much of the buildup to the four-day hearing, her faith was not mentioned by Democrats on Monday, according to NPR.

Democratic Sen. Dick Durbin of Illinois spoke in front of a poster of what he called "The McConnell Rule." He cited Senate majority leader Mitch McConnell's words from 2016 in which he said "this vacancy should not be filled until we have a new president."

Sen. Dick Durbin says Republican senator backtracking on the view that a Supreme Court nominee should not be confirmed during an election year is “a shameless, self-serving, venal reversal.” https://t.co/287bRvyVxi pic.twitter.com/3DyHNdSFpl

Durbin says they should hold-off until after the election before voting on a new Supreme Court justice. He stated that the rush to confirm Barrett must mean Republicans believe President Donald Trump won't be re-elected next month.

"Why are senate Republicans so afraid to give people a voice about the future of the Supreme Court, first they must doubt that Donald Trump will be re-elected," Durbin says. "Second, they want a six to three Supreme Court to carry out a Republican agenda that's really not very popular with the American people."