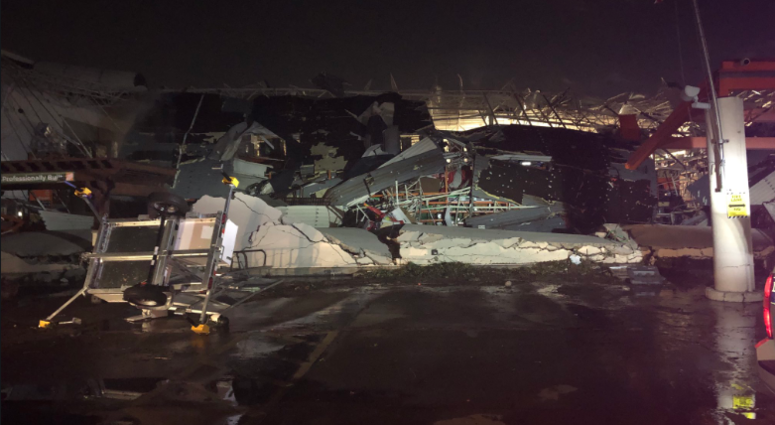 Parts of the region were under a tornado warning Sunday evening, and there were reports of multiple buildings with structural damage.

Tens of thousands of people in north Texas are also without power.

KRLD's Austin York spoke with one man near Preston and Royal whose home had serious damage.

"We were sitting at home and all of a sudden the windows just blew straight out on our condominium," he said. "We're on the bottom floor. On the second floor, the roof flew off in front of the buildling. Our condo is virtually destroyed."

A Home Depot store at 75 and Forest was also damaged during the storm. The store manager had closed the building and sent employees home before the storm hit.

Several buildings on Marsh Lane near Walnut Hill were damaged.

The windows were blown out at one Specs liquor store.

Several fences and trees were knocked down in the neighborhood.

A shopping center with a hardware store on Marsh Lane just north of Walnut Hill had structural damage.

PLEASE SHARE: DO NOT approach a downed power line. If a downed line is sparking or blocking access to a property, call 911 immediately.

Call Oncor at 888-313-4747 to report downed lines that are not sparking, or for questions about power restoration.

Dallas Fire & Rescue's Station #41 sustained significant damage during the last night's storms. Thankfully no injuries were reported to any of the firefighters inside.