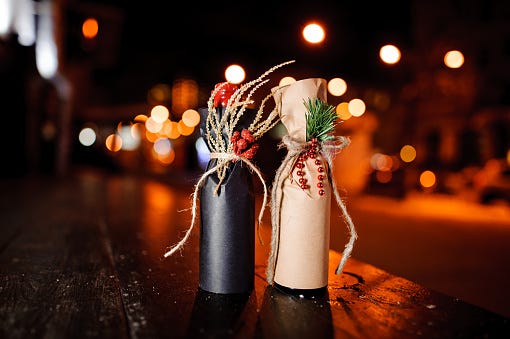 ﻿Smirnoff wants the holidays to be all about Ice, Ice baby!

No, not the early one-hit wonder by Vanilla Ice, but the decade-old drinking game known as “Icing.”

Cocktail aficionados of a certain age (i.e. college kids in 2010) will recall that “Icing” entailed hiding a bottle of Smirnoff Ice and whoever found it had to get down on one knee and chug the entire beverage.

Boring box on the outside. Smirnoff ICE on the inside.

Nine years later, Smirnoff finally wants in on the action and has launched a line of holiday gift boxes. On the outside, they may look like they hold generic household items, but in reality contain a bottle of Smirnoff Ice inside.

The cardboard boxes feature the logo of the non-existent Italian brand name Cremsiffino, which is an anagram for Smirnoff Ice, alongside images of a hanger, hand mixer and a mini- ironing board.

Unwrapping the Secret Santa gift will have the recipient side-eyeing your boring present, until they open the box and realize they need to hit the ground and down the flavored malt beverage. Unless they are over 35, then you’ll need to explain the joke.

The perfect gift for your second favorite coworker. The new #SmirnoffICEBox is available now. pic.twitter.com/y1sfUWZRb4

"Since its launch which defined a new category, Smirnoff Ice has a history of being unconventional and adding fun to any occasion, which is why we created the Cremsiffino gift boxes as the perfect white elephant gift this holiday season," the company’s Brand Director, Krista Kiisk, said in a press release.

"With the Cremsiffino boxes, we've turned what can be a boring gifting moment into delicious, unforgettable fun, and the gift giver into the party legend.”

The boxes cost $20 if you want one with a Smirnoff Ice or for $10 you can get the box by itself. Both are available for a limited time at Giftagram.com to anyone 21 and over.