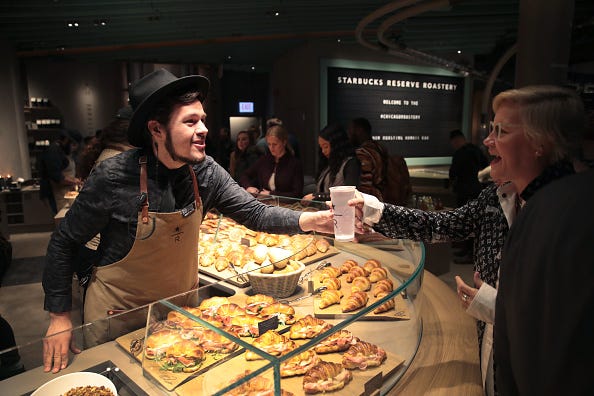 Starbucks is changing their policies and allowing employees show off more of their individuality.

The coffee giant has relaxed their dress code policy and will start letting baristas wear facial piercings, according to Business Insider.

Starbucks is changing its dress code to allow baristas to have facial piercings https://t.co/a2lp31m4kb

Previously, partners, as they are called internally, were only allowed earrings, small ear gauges, or a small nose stud, with the policy clearing stating: “No other pierced jewelry or body adornments are allowed, including tongue studs.”

Going forward, employees can wear one small facial piercings that is no larger than the size of a dime. It’s unclear if that will allow for septum piercings.

"We believe the Starbucks Experience is best delivered when partners can bring their whole selves to work," a Starbucks representative said in a statement.

"Based on partner feedback, we have simplified our resources and approach to dress code to provide more clarity and make it easier for partners to select their wardrobe for work."

Starbucks is also streamlining their Dress Code LookBook, which is currently 15 pages, into a one-page list of guidelines.

According to Fox News, this is the biggest change to the company’s dress code since undergoing an overhaul in 2016. Three years ago, they expanded the clothing color palette beyond black and white and began allowing employees to wear muted colors like gray, navy and brown.

It’s been a busy week at the coffee chain, in addition to the facial piercings policy update, the company also added the Irish Cream Cold Brew to their holiday men and relaunched the highly-coveted Starbucks for Life promotion.