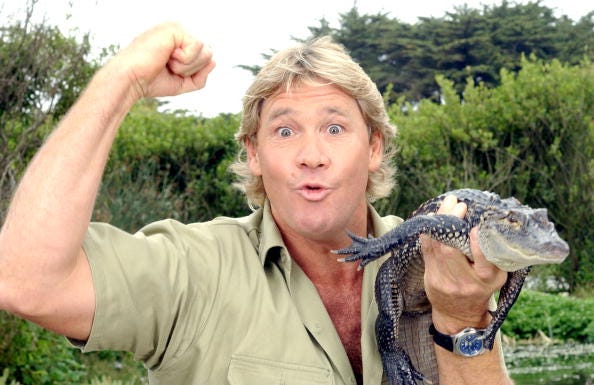 Steve Irwin’s son, Robert Irwin, took to Instagram this weekend with an adorable tribute to his dad. But the photo will have you wondering if you’ve just traveled back in time.

Robert Irwin, who is 15 years old, posted a photo Wednesday showing himself throwing meat into the mouth of a very hungry crocodile. A photo of the late Irwin feeding the same crocodile 15 years prior was posted underneath.

Australian journalist Lisa Wilkinson commented on the post with her kind words. “Can’t begin to imagine how proud he would be Robert,” she writes.

Others chime in with their own messages with actress Emmy Perry saying, “This is truly everything! Your dad must be overjoyed to see you literally walk in his footsteps!”

Robert is no stranger to heart-wrenching Instagram posts about his father. Just a few weeks ago, he posted this photo of Steve Irwin hanging out in a crate with his two kids.

You’ll always be the best dad in the world ❤️

Steve Irwin, former host of “The Crocodile Hunter,” passed away in Septemberof 2006 when a stingray attacked him off the coast of Australia. Since his passing, his kids and wife have continued to run the Australia Zoo and work towards protecting wildlife across the globe.

In 2018, Bindi told People, “Every day we work with the beautiful animals at Australia Zoo and do the best we possibly can to ensure dad’s dreams and goals continue.”

sports
Bears' Allen Robinson clears concussion protocol, to play Sunday against Saints
sports
Eagles’ Dallas Goedert, out since Week 4, to return against Cowboys
sports
Can Cowboys avoid being third team to start 0-8 against the spread?
news
Family of nurses saves boy from drowning
music
Trick or treat! When celebrities go as other celebrities for Halloween
music
Don't be a Grinch! Build your own Whoville for the holidays