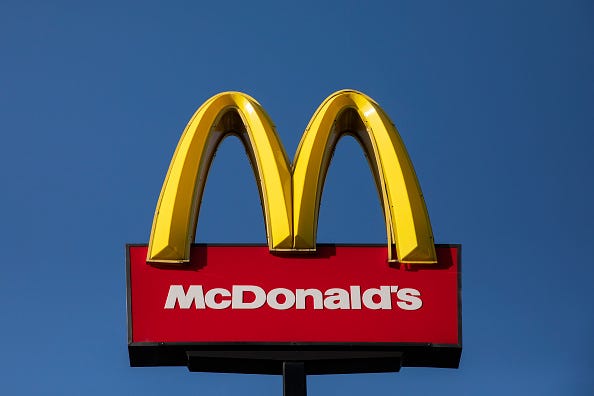 The Filet-O-Fish almost didn’t make it on the McDonald’s menu.

While the fast-food chain’s lone non-beef or chicken sandwich is now considered iconic, its creation came about after one of its franchise owners noticed a drop in sales on Friday evenings back in the 1960s, according to MSN.

Is it wrong to love the Filet-O-Fish so much? Asking for a friend.

Normally the start of the busy weekend, Cincinnati franchise owner Lou Groen saw that business plummeted in the predominantly Catholic neighborhood, as many Catholics forgo eating meat on Fridays.

Groen also noticed that a competitive restaurant served a fish sandwich and had been able to maintain brisk business. He proposed the idea of creating their own fried halibut version to McDonald’s CEO Ray Kroc.

Kroc was already working on a meatless option consisting of grilled pineapple and cheese on a bun, which was to be branded as a Hula burger.

To see which would be more popular, Kroc agreed to put both sandwiches on the menu on a Friday night and whichever sold the most would be implemented more permanently.

After the first week, they sold six Hula Burgers and 350 fish sandwiches. Needless to say, the Hula Burger bit the dust.

To bring the price down, the halibut was replaced with cod, and cheese and tartar sauce were added to form what became known as the Filet-O-Fish. By 1965, it was available at all McDonald’s locations nationwide.

Years later, the sandwich was retooled again with Alaskan Pollock substituting for cod.

The Filet-O-Fish continues to be a success, with a quarter of the yearly sales of the pescatarian delight being sold during the Lent season in the spring.

Looking to expand their meatless menu, McDonald’s recently announced they would be testing a Beyond Meat plant-based burger entitled the P.L.T. in Canada.

While they still don’t have plans to offer it in the United States, we can all take solace in the fact that the Hula Burger never saw the light of day!