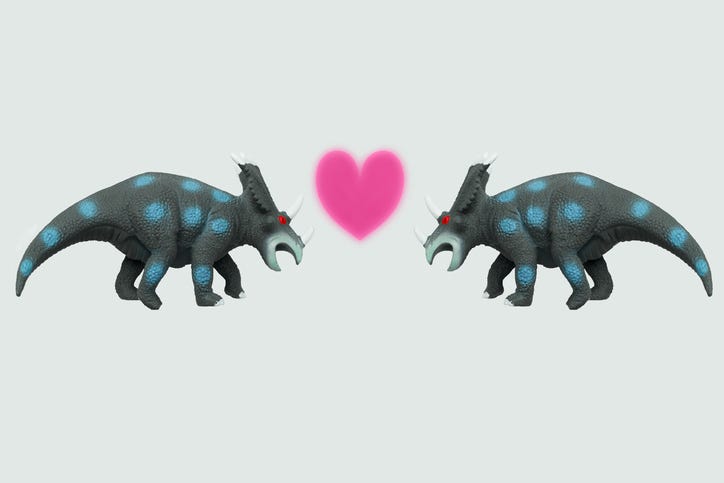 Singer Tom Rosenthal learned that musical talent runs in the family after his young daughter, Fenn, wrote her very first song, which she also produced and sang.

Rosenthal shared the song on social media with the caption, “She came up with all the words herself and I helped her a little bit with the tune. It’s called ‘Dinosaurs in Love.'”

Fenn, my nearly 4 year old daughter, recorded her first ever solo song today. She came up with all the words herself and I helped her a little bit with the tune. It’s called ‘Dinosaurs in Love’. 🦕❤️🦕 pic.twitter.com/erCgG0sUvP

The song, which hits the 1-minute mark, finds Fenn crooning about dinosaurs having a party and falling in love.

“They eat fruit and cucumber / They fell in love,” Fenn sings before her dad asks, “Then what did they do?”

That’s when the song takes a heartbreaking and somber turn as Fenn brings up death and extinction.

The incredibly woke song garnered a huge response on social media from users who said the song made them emotional.

“Was not ready for that ending. Actually,” one commenter noted.

“One day you’re eating fruit and cucumber and the next you’re extinct. Rough times,” another user tweeted.

One day you're eating fruit and cucumber and the next you're extinct. Rough times

Another quipped, “I didn’t expect to have my heart broken but here we are.”

“The end hit me like a meteor,” another replied.

One user said the song served as a reminder to “always tell the dinosaurs close to you that you love them.”

It’s safe to say Fenn figured out the winning formula behind writing a song that resonates with large audiences.