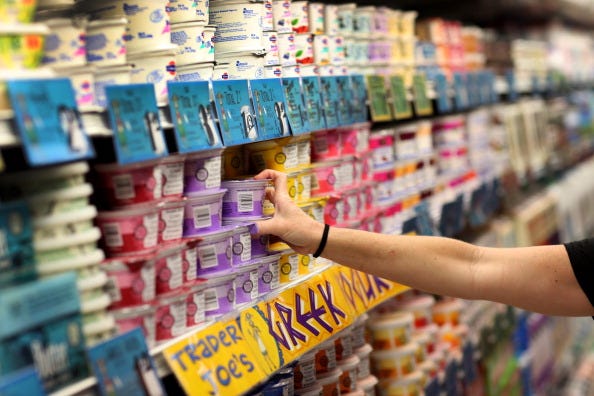 Joe Coulombe, the founder of the popular “fresh” grocery store Trader Joe’s, passed away Friday at his Pasadena, California home following a long illness, according to The Associated Press.

Coulombe led an impressive life attempting to revolutionize the supermarket industry. He had a vision for a new generation of grocery stores in the 1960s that would prioritize high-quality products, low costs, and healthy and tasty options.

📷: “Strawberry Champagne Cake,” feat. #TraderJoes Vanilla Cake & Baking Mix • Tap the link in our bio to get this timely #TJsRecipe! — Nothing says romance like a couple of strawberries fizzing away in a flute of Champagne… except a PERSONALIZED STRAWBERRY CHAMPAGNE CAKE! Whether you’ll be celebrating #ValentinesDay, #GalentinesDay, or just plain #TGIF, this boozy, berrylicious cake will surely win hearts. • To be fair, thanks to our Vanilla Cake & #Baking Mix, we kinda already had the #cake in the bag—or rather, in the box. We simply prepared it per package instructions, swapping the milk for #Champagne! And the berries? The berries are in the buttercream, dahling… • 🍓+🍾+🍰= 💗

And thus, Trader Joe’s was born, a quirky grocery store filled with nautical themes, staffed by “captains and mates,” and boasting unique items previously only found in their grocery store aisles.

Coloumbe’s son said his father was heavily involved in bringing the vision to life and conducted “lots of taste tests … always the aim was to provide good food and good value to people.”

He also reportedly did extensive research on infamous products like the “Two Buck Chuck” wines, which was sourced directly from Napa Valley in an effort to make affordable wine taste like the expensive stuff.

In 2011, the supermarket pioneer told the Los Angeles Times that “Trader Joe’s is for overeducated and underpaid people, for all the classical musicians, museum curators, journalists.”

However, consumers from all walks of life grew to love the theme, the vibe, the products, and Coloumbe quickly watched his namesake grow into a retail giant that boasted stores in over 40 states.

He eventually sold Trader Joe’s to German supermarket company Aldi in 1979 but stayed on as CEO until 1988.

He is survived by his wife of 67 years Alice, three children, and six grandchildren.

Prior to his success with Trader Joe’s, Coulombe owned a chain of 18 convenience stores called Pronto Markets, which he realized couldn’t compete with a better-funded 7/11.