"Satellite imagery and NOAA Hurricane Hunter aircraft data indicate that the broad area of low pressure that NHC has been following for the past couple of days has consolidated enough to be considered a tropical depression," said National Hurricane Center forecaster Eric Blake. 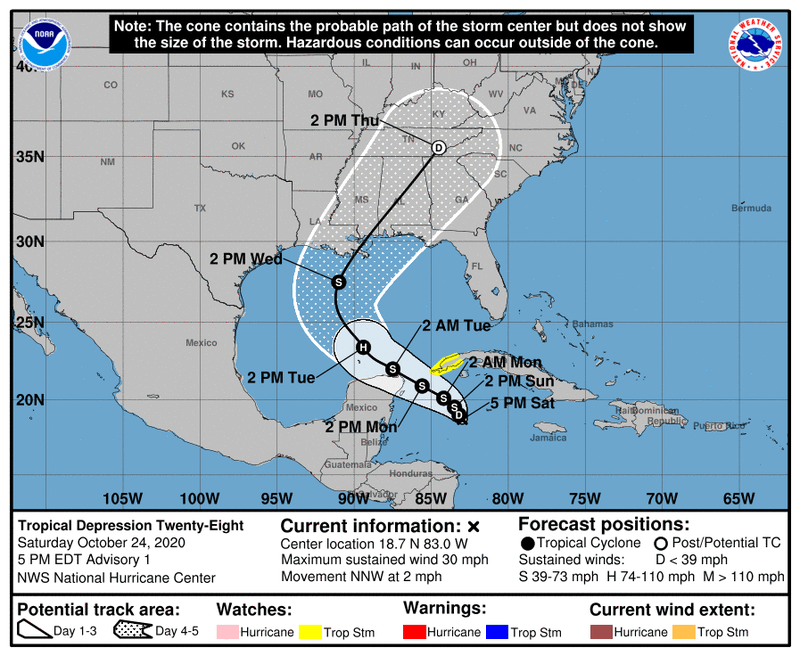 The depression isn't moving very much right now, just two miles per hour to the north-northwest. The hurricane center expects that to change.

"Mid-level ridging should build over the northern Gulf of Mexico on Monday, forcing the depression to move faster to the west-northwest toward the Yucatan Peninsula or Channel," said Blake. "The ridge shouldn't last too long, however, with a substantial upper-level low forecast to eject out of the southwestern United States in a few days, causing the tropical cyclone to sharply turn to the north and northeast on Wednesday."

Here are key messages on newly-formed Tropical Depression 28. A Tropical Storm Watch is in effect for western Cuba and there is also a risk of tropical storm conditions in the northern Yucatan Peninsula Monday night and Tuesday. https://t.co/tW4KeFW0gB pic.twitter.com/pAbkAtohWH

4 p.m. Saturday - Tropical Depression 28 forms in the Caribbean Sea. It is forecast to become Tropical Storm Zeta on Sunday and move into the Gulf on Tuesday. A landfall as a tropical storm is set for Wed. somewhere along the Gulf Coast. Still some unknowns about long-range path pic.twitter.com/beFdebO46W