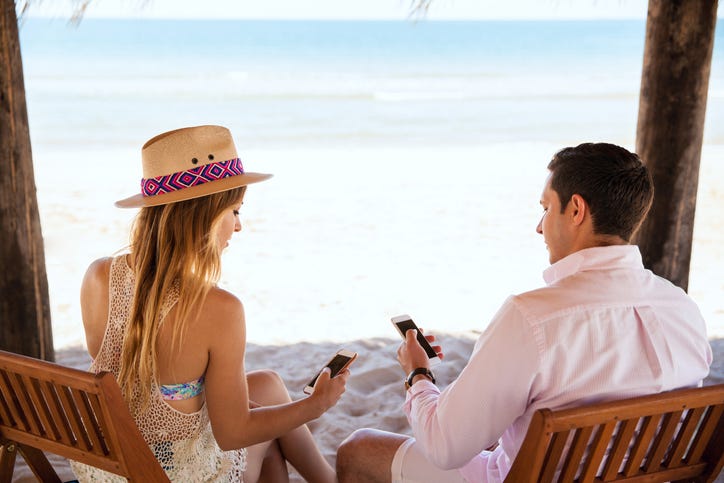 Americans on vacation are so hooked on their phones that they’d rather be laid up sick on the couch than go without Internet access. Netflix and ill?

According to a new survey, 49% of respondents said not having WiFi was a bigger vacation disaster than both food poisoning, bad weather, or a lost credit card, reported the New York Post.

In fact, the only thing worse than not being able to log on to Instagram or Spotify was lost luggage, which 54% said would be a travesty. I mean, you need to wear something while scrolling your feeds!

Majority of vacationers would rather have no air conditioning than no internet https://t.co/dNP8Ue2dkg pic.twitter.com/yWe3vAZq41

Of the 2000 Americans polled, 75% said Internet access was more of a necessity on vacation than air conditioning (61%) or clean clothes (53%). Because there’s nothing quite like sweating in your stained shorts while watching “Stranger Things.”

But it gets even more interesting, as 40% said they’d rather binge-watch their shows instead of having their morning latte. Orange is the new Black …Coffee?!

Some other intriguing, yet not surprising, discoveries from the survey include how quickly children will turn on television upon arriving to their destination. On average, 60% of kids wait 31 minutes until asking to turn on their TVs, or, should we say, iPads. The rest don’t even make it more than 15 minutes.

As far as adults go, 58% take just 27 minutes before inquiring about the Wi-Fi password, while the other 42% start asking within the first 15 minutes of checking in.

Moral of the story is, if you’re in Cancun or Paris or Disney World and are more concerned with catching up on “Big Brother” than seeing the sights, then what you really need is a vacation from your screens!