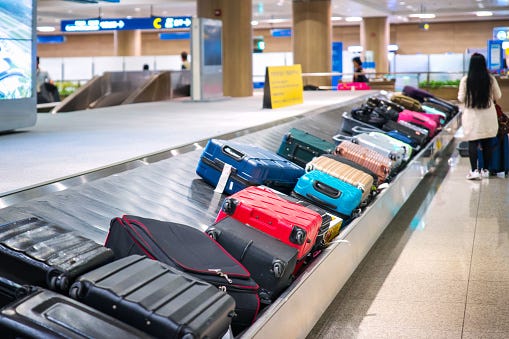 A woman went to hilarious lengths to avoid paying extra money for her baggage at the airport.

When passenger Gel Rodriguez was informed by airline staff that her suitcase had exceeded the weight limit she decided to avoid the fees by layering up with multiple items of clothing, reported The Daily Mail.

Rodriguez threw on five shirts, three pairs of pants and three jackets and was able to knock off  5.5 pounds from her baggage, which was enough to avoid the surcharge.

when the airline staff at the check in counter said: “EXCESS NA PO KAYO, 7kg lang po allowed na hand carry.” me: NO PROBLEM! 😏 *from 9kg to 6.5kg baggage 😅 #ExcessBaggageChallengeAccepted

"I didn't want to pay the fee for the excess baggage because it was only 2 kilograms (4.4 lbs)," she told Vice.

Once she was sure her fashion risk had paid off, she shared an image of her ensemble to Facebook with the hashtag #ExcessBaggageChallengeAccepted.

The post quickly went viral and has since garnered 21K shares, 34K likes and over a thousand comments.

The overall reaction has been positive with many saying her efforts were “brilliant” or asking “why didn’t I think of that?”

Rodriguez was caught off guard with the response for the post and joked about her one regret.

"If I had known it would go viral, I would have posed better,” she added.

But despite saving some cash and garnering some her newfound fame, Rodriguez, who never named the airline or airport where it all went down, cautioned others from following in her bundled up footsteps.

She added: "It was really hot. I don't recommend other people do it."