White Claw is gearing up for summer 2020.

It’s been 16 months since the alcohol brand introduced a new flavor, but they’re making up for lost time with this latest offering.

The company is ready to dominate the spiked seltzer scene and your tastebuds with new lemon, watermelon, and tangerine beverages. 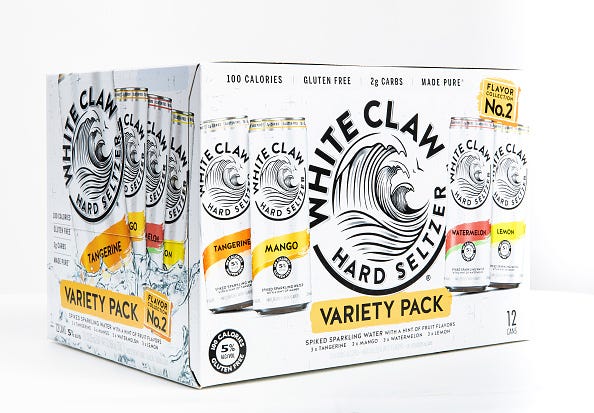 You don't have to wait to get your hands on these because the trio of flavors will hit store shelves starting Thursday.

Fans can purchase them individually or in 12-can variety packs, which will also include fan-favorite and second-best-selling flavor, mango.

Mango was previously left out of the original variety pack that includes black cherry, lime, ruby grapefruit, and raspberry.

Danelle Kosmal, the vice president of Nielsen's Beverage Alcohol Practice Area, said that variety packs are critical to a hard seltzers’ success as they make up 63% of sales.

White Claw made the announcement on Twitter writing, “The wait is over! Introducing the highly-anticipated, expertly crafted new flavors in White Claw Flavor Collection No.2.”

The wait is over! Introducing the highly-anticipated, expertly crafted new flavors in White Claw Flavor Collection No.2. #WhiteClawFlavors pic.twitter.com/94TgEIsZ2k

The low-calorie, -sugar, and -carb drink splashed onto the scene in 2016, but it didn’t become a hit until last summer when it got so popular, it caused some temporary shortages.

The company confirmed to CNN Business that they’ve adequately prepared and another shortage is unlikely.

Despite an influx of spiked seltzer offerings, White Claw remains the top-rated brand, which likely has something to do with the viral motto: “There are no laws when you’re drinking claws.”

As for the flavors, White Claw heard and answers the prayers of over 70,000 social media users who suggested the flavors.

Word on the street is that some of the other flavor suggestions were peppermint and pumpkin spice, so we should be grateful that White Claw made the right choice.