How long could leftovers from McDonald’s last?

According to TikTok user @aly.sherb, a really long time.

The woman kept a McDonald’s hamburger and fries in a shoebox in her closet for 24 years!

She bought the meal in 1996 and still kept it in the original packaging, which featured an advertisement for a NASCAR race.

This Woman Revealed A 24-Year-Old McDonald’s Burger And Fries On TikTok https://t.co/xD5quR5ZPj

If you didn’t know how long the meal had been around, you'd probably be deceived by its appearance because it almost looks edible.

“The fries look like they maybe could've fallen under your seat a month or so ago that never rotted or decayed,” the woman said in the video.

She explained that the burger was also in tip-top condition.

“The bread has never molded, the meat has never rotted, and it has never even broken,” the woman said. “It’s completely intact.”

ME BEING THE SAME AGE AS THIS BURGER???!!?? pic.twitter.com/GU7Wx2VB8F

The woman’s burger is 4 years older than the hamburger that went viral earlier this year.

Back in January, David Whipple from Logan, Utah gave the public a glimpse at the burger he purchased in 1999.

It gained national attention because the aged-burger looked like it could have been ordered just 20 minutes ago rather than 20 years ago. 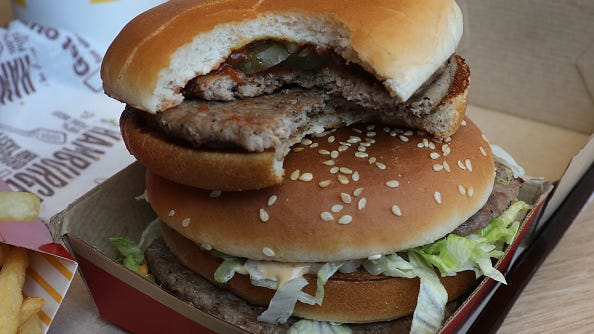 Whipple explained that he threw the burger in a coat pocket and forgot about it. He found it in 2013 when it first went viral and held out for the sandwich’s 20th birthday, though, the burger barely looked over a day old.

McDonald’s eventually released a statement explaining that despite the unchanged appearance, the burger “had definitely undergone some changes."

“In the right environment, our burgers, like most other foods, could decompose,” said Anne Christensen, Director of Field Brand Reputation for McDonald’s. “But, in order to decompose, you need certain conditions — specifically moisture.”

“Without sufficient moisture – either in the food itself or the environment – bacteria and mold may not grow and therefore, decomposition is unlikely. So if food is or becomes dry enough, it is unlikely to grow mold or bacteria or decompose. Food prepared at home that is left to dehydrate could see similar results. Similarly, this particular burger is likely dried out and dehydrated, and by no means the same as the day it was purchased,” she continued.

So, while it looks edible, you should probably avoid consuming it!