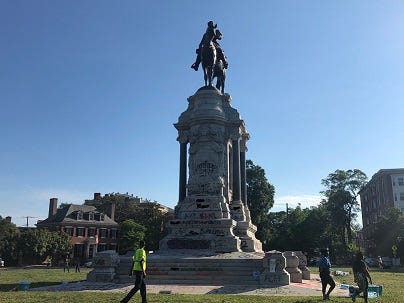 Richmond, Va. (Newsradiowrva.com) -- Governor Ralph North announced budget proposal Friday afternoon that included nearly $11 million to support efforts to transform Monument Avenue.  Multiple monuments were removed on the Avenue in 2020, and Northam's efforts to remove the Lee Monument are currently tied up in the courts.

The  funding will enable the Virginia Museum of Fine Arts to hire staff and launch a community-driven initiative to redesign Monument Avenue. Additionally, there will be $9 million for the development of a Slavery Heritage Site and improvements to the Slave Trail in Richmond’s Shockoe Bottom neighborhood. This funding will support efforts to preserve the area known as the Devil’s Half-Acre, or Lumpkin’s Jail, as a historical site.

The Governor makes a presentation to the General Assembly budget committees later this month.