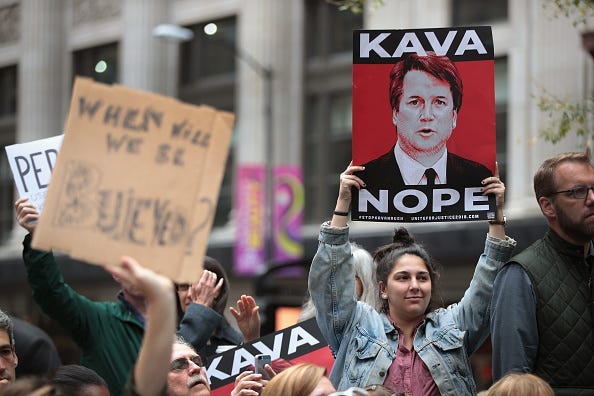 The volatile #MeToo movement may be coming to an end, or perhaps it already is. The biggest reason for its downfall: hypocrisy.

A recent study by the Media Research Center shows that 95 celebrities who are staunch supporters of the #MeToo movement attacked and berated Supreme Court Justice Brett Kavanaugh when he was accused of sexual assault in 2018 during his appointment hearings. But now that presumed Democrat presidential nominee Joe Biden has been accused as well, they are deafeningly silent.

The biggest hypocrite of them all is perhaps Alyssa Milano. An outspoken advocate of the movement and feminist, Milano called Kavanaugh a liar and voiced her support and belief of Christine Blasey Ford on Twitter. She even sat in the Senate building during the hearings and harassed Senator Susan Collins (R-ME) in her office to keep Kavanaugh off the Supreme Court.

In the wake of the Biden allegations, Milano remained silent. Then, about a month after the allegations were made public and under growing public pressure, Milano broke her silence by voicing her support for Biden. She justified it in an op-ed for Deadline by claiming the Reade-Biden situation was not as "black and white" as the Kavanaugh accusations.

And of course, the ladies of the victim awareness organization TIME'S UP - which includes many top-tier Hollywood stars such as Reese Witherspoon, Brie Larson and Natalie Portman - were all on the front lines of supporting Ford and demanding survivors be believed, all while condemning Kavanaugh. In the weeks since Reade's allegations against Biden were made public, however, not a single one of these starlets have spoken out against the former vice president or in support of Reade.