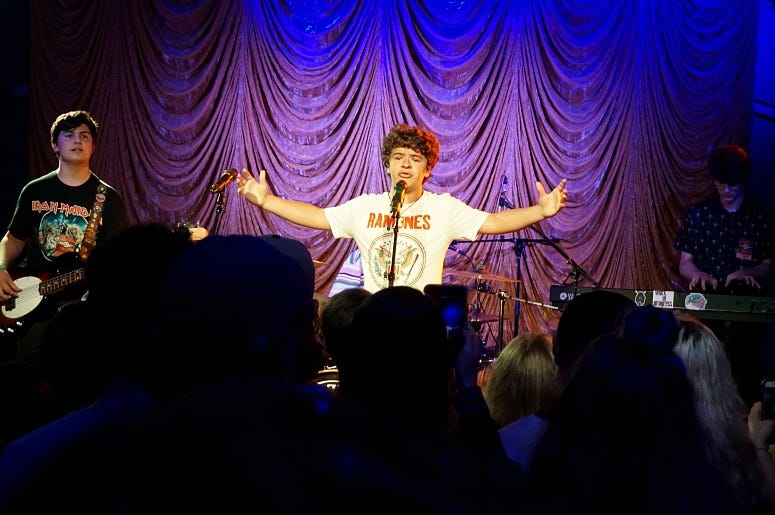 While many of us have spent our summer watching the gang from Hawkins fighting off The Flayed in season three of Stranger Things, Gaten Matarazzo has been busy getting the band back together. The 16-year-old actor who plays Dustin Henderson on the Netflix series has rejoined his siblings and friends from Little Egg Harbor Township, New Jersey to once again work on the band known as, Work In Progress.

Along with his sister Sabrina and brother Carmen, the seven-piece has gone from cover band side hustle to recording originals and making a run at something real, playing a handful of tour dates and looking for time to record their debut EP.

"I think after this tour I finally get a break," explains the in-demand actor before one of their tour stops. "There's this whole rumor going around that season four was gonna start filming in the fall. Season four is not even confirmed yet. And if it does start, it will start in 2020."

"So I have a good amount of time, the fall, the winter, to have a break and just do school. So I think that's gonna be plenty of time to start writing and start working on the EP."

Gaten shares the vocal duties in Work In Progress with his sister Sabrina, who sounds seasoned beyond her years with a dynamic and rich voice. "I just want to be able to showcase all the different types of music that we love to listen to, and express it in our work and on our EP" she says.

Together the Matazrazzos have grown up in a house of music, with Sabrina first obsessing over Avril Lavigne. "I knew all the words to 'Complicated' when I was three-years-old" she laughs. For Gaten his first musical love also came courtesy of his older sister. "The first one that was given to me, the first one that I listened to, you gave it to me cause you didn't want it anymore," he says, shooting his eyes over to his sister. "It was the Jonas Brothers album." 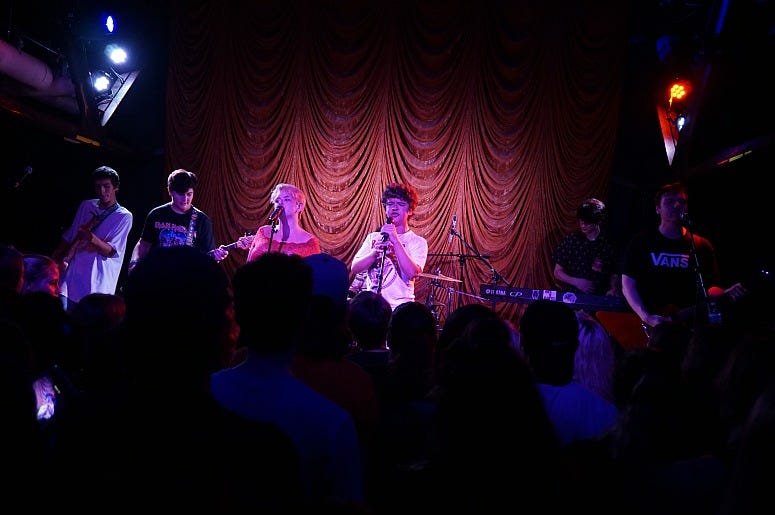 Together they graduated to pop punk, playing Paramore and Green Day around the house as they shaped their musical sensibilities. "My Dad played it a lot" he remembers of Green Day's American Idiot album. "It was super emo."

That era shines in the Work In Progress set, which is currently mostly covers with two originals in the mix. The band mines the music of My Chemical Romance and Fall Out Boy, but also offers surprisingly sure-footed versions of an R.E.M. song and some deep Billy Joel.

"We started as a cover band and we were just having fun with it, but it kind of became more of a serious thing as we started playing more gigs," Gaten details, as the group continues to hone new songs for the setlist as they develop their own sound. "It just makes me feel like I'm always at home and it just gives me something to look forward to when I come back. I don't like doing nothing, so this is good."

"There's always songs where we're doing a whole setlist and then we'll be listening to songs just like on a playlist and we'll go, 'ahh, we should have done this one'" describes Sabrina. "After we're done with this show we're learning 'Bohemian Rhapsody'" their brother Carmen chimes in.

"Oh my god" they all groan collectively. "We will ruin that song." 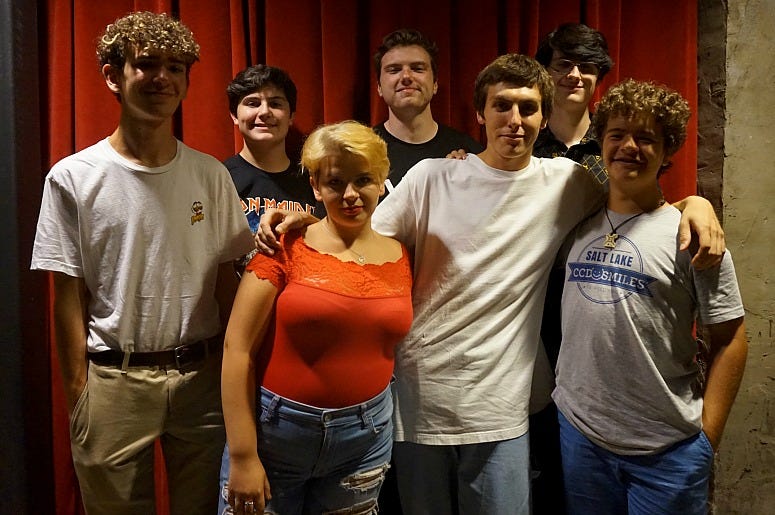 Of all the songs the band toys with for their shows, there's one the crowds have asked for that they have been holding back on. Every night, they continue to yell for Gaten to perform "Never Ending Story," a song central to season three of Stranger Things and a constant request at their shows this summer.

"I really want to wait for if Gabby ever comes to a show," he says of Gabby Pizzolo who performs the song with him as Suzie in the series. "She's a very good friend of all of ours."

"If we ever play it, Gabby needs to be there and these guys need to learn it to" Gaten motions to the band. "I feel bad when they yell at me."

This past weekend Work In Progress unfortunately had to postpone the remainder of their upcoming tour, with hopes to reschedule soon. For info on those dates and their original music, check out their site at wipbandofficial.com.

For more from Work In Progress and Gaten Matarazzo, check out the full interview above.