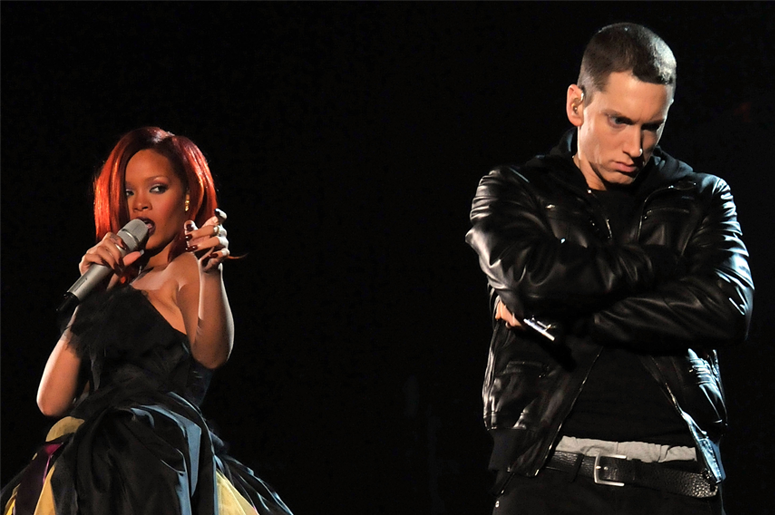 After a bit of chatter, last night Eminem dropped the not-so-surprise deluxe version of his album Music To Be Murdered By. On it are a few featured collaborations, including the likes of Dr. Dre, Ty Dolla $ign and DJ Premier.

However, the addition to Side B we’re most interested in is a track called “Zues,” in which Eminem apologizes to Rihanna for his previous siding with Chris Brown on a track that got leaked in 2019, which were sure we don’t need to get into why it’s just wrong.

At the time of the leak, Dennis Dennehy, a spokesperson for the real Slim Shady, responded that the lyrics were “over 10 years old,” adding, “after Eminem recorded it, he scrapped it, and rewrote it. Obviously he and Rihanna have a great relationship.”

Ummm, yeah whatever, sounds legit, but still he wrote it. And now Em is offering a “wholehearted” apology to our favorite bad gal for the leaked song.

“But, me, long as I re-promise to be honest/ And wholeheartedly, apologies, Rihanna,” he raps. “For that song that leaked, I’m sorry, Ri / It wasn’t meant to cause you grief / Regardless, it was wrong of me.”

While Marshall uses the track as an opportunity to right his wrongs with RiRi, It’s Eminem so you know he’s still gonna talk smack. He doesn’t even wait to do so either, starting the song of with “She says I am trash, but she listens to Tekashi.”

Speaking of, another one of Em’s newly released tracks has the people talking. While this diss on “Gnat” isn’t outright obvious, it’s exactly what you’d expect from the Detroit native wordsmith.

“They say these bars are like COVID, you get ’em right off the bat,” he raps. “Infected with SARS and Corona, like you took a bite off of that / But it goes from Martian to human, that’s how the virus attacks / They come at me with machine guns, it’s like trying to fight off a gnat.”

Of course we’re referring to his references to machine guns in relation to his long and ongoing beef with Machine Gun Kelly. We might be reaching on this one, but Twitter seems to agree.

Check out the music video for “Gnat” below and hear for yourself, and listen to “Zues” above to get your dose of Em’s rapid-fire disses and apologies.