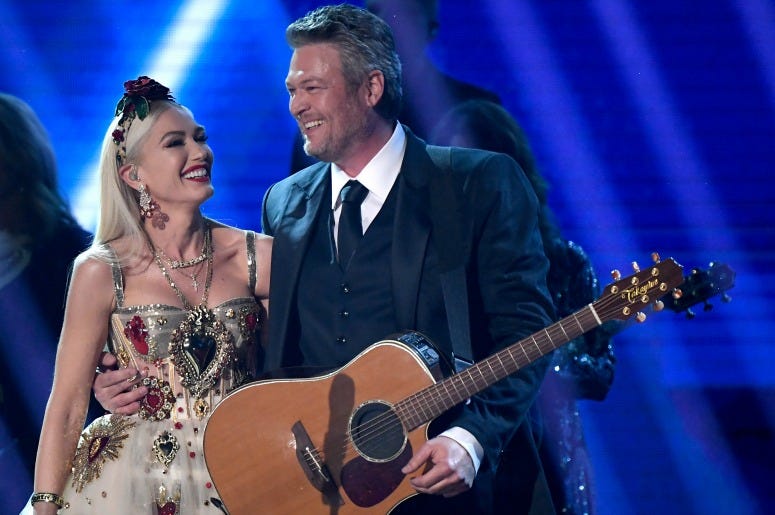 Gwen Stefani and Blake Shelton announced their engagement in October, but according to Gwen, she almost ruined Blake's proposal plans, even though she had no idea he was going to pop the question.

On Tuesday's installment of The Kelly Clarkson Show, Gwen told her fellow The Voice coach that Blake wanted to propose to her on his Oklahoma ranch, but at the time, Gwen didn't really want to leave Los Angeles and return to Oklahoma "because it was getting too complicated with COVID and the family."

But finally, Gwen, Blake and her kids, plus his brother and his sister and their respective families, all made the trek to Oklahoma. However, Gwen told Kelly, nobody knew about the proposal except Gwen's dad, because Blake had told him during her birthday celebration in early October what his plans were and even showed him the ring.

As for the big moment, Gwen said, "I walked in and my son was sitting right by this fireplace and Blake basically was getting down on his knees to do a fire. And he goes, 'Hey, can you look in that cabinet over there and get me a fire starter?'"

"So I open the cabinet and there was, like, a ring in a box and I was like, 'Aaah! What? Are you serious?'" Gwen continued. "So everyone came running 'cause they heard us screaming and crying... so there was no video; my sister-in-law-to-be was just, like, shooting pictures and that's the photo that we put out."

The superstar couple recently scored their second #1 hit on the country charts with "Happy Anywhere." Their previous duet, "Nobody But You," which was Gwen's first country hit, topped the charts earlier this year.