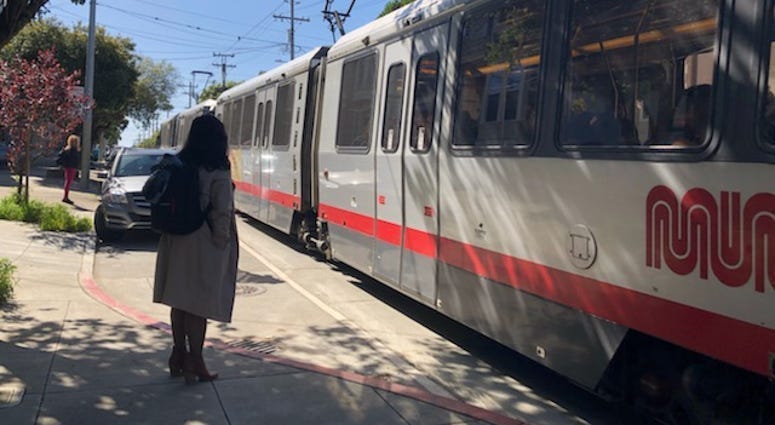 Much of the Bay Area has been ordered to shelter-in-place, with “non-essential” trips banned from March 17 until April 7.

People still need a way to get around, however, whether it’s to work or to pick up groceries and household items that are needed.

KCBS Radio has put together a guide to getting around during this phase.

BART will be operating with most of its regular services, ensuring a means for commuting for those with essential work duties, but will cancel the extra AM & PM commute hour trains that run on the Yellow (Antioch) Line, since they are only averaging 7 riders per car. BART has experienced a major dip in ridership, which is down 85%.

The agency reminds people to stay away if they are sick.

We will be maintaining our base 15-minute headways during regular commute hours.

Please note the extra AM and PM commute trains on the Yellow (Antioch-SFO) Line will not be running starting tomorrow due to low ridership.

Muni has activated more bus services in neighborhoods, especially because ridership is down on financial district routes.

The F and E streetcar lines, as well as the cable cars, have eliminated service to ensure the health of Muni operators.

The following lines will not run on Tuesday, March 17:

“Meters will continue to be enforced,” Tomlin said. “Because our businesses will still be open providing essential services for people, and likely increasing the rate of driving to some of our neighborhood commercial districts.”

Neighborhood parking permits will not be enforced, and peak hour tow-aways are being suspended.

Tomlin added that rules related to public health, safety and accessibility of services are still in tact.

Police will also step up patrols in those areas, as a deterrent to crime.

Mayor London Breed announced on her Twitter on Tuesday that street sweeping violations will not be ticketed through the end of March.

.@SFMTA_Muni will not ticket for street sweeping through the end of the month. Tickets issued today will be waived.

However, it is crucial that we still clean our streets to prevent trash buildup and local flooding.

Please still move your car for street cleaning if you can.

AC Transit, serving the Alameda-Contra Costa Transit District, is still operating as normally scheduled with the exception of its supplemental service (600-series) to many East Bay schools beginning Monday, March 16.

It is sanitizing all its buses and facilities daily.

We are committed to sanitizing all of our buses and facilities daily as a precaution against COVID-19. This includes handrails, seats, fareboxes and other surfaces.
Read more about our engineering controls here: https://t.co/9ttQGBFUO8 pic.twitter.com/OFAIPLm3wa

The San Francisco Bay Ferry will run a reduced ferry service from March 17 through at least April 7, 2020, with services for Richmond, Harbor Bay and South San Francisco suspended.

Use https://t.co/wtGxUsCHEk to identify options if you need to cross the bay for 'essential reasons' under public health directives

The Baby Bullet express is suspending, which goes between San Jose’ Diridon Station and the 4th and Townsend station in San Francisco.

Caltrain will continue to run the 55 local and limited trains, which tack on 25 to 55 minutes to the Baby Bullet trips.

A new schedule is effective Tuesday, March 17,  and an official statement is available on its website.

The SMART District is temporarily cancelling weekend train service through through Sunday, April 5.

There is no change to weekday train service, but it promises to monitor the situation and make adjustments as necessary.

A reduced bus and ferry schedule between Marin County and San Francisco will begin Tuesday, March 17. Details can be found on their website.

SamTrans, which operates 70 routes throughout San Mateo County, will continue to operate a non-school day schedule on weekdays.

Paratransit and weekend service will operate unchanged, and ridership will be monitored closely to ensure proper social distancing as ordered by the Center for Disease Control and Prevention.

In a press release, SamTrans says it is maintaining daily onboard cleaning and sanitation protocols and bus operators are provided hand sanitizer to ensure their health.

The public health order is intended to be in place until April 7, 2020, but may be extended or reduced.

Uber and Lyft are still operating, but have scaled back on drivers.

Both companies have also disabled their shared-ride options, UberPool and Lyft Line, where up to four riders headed in the same direction use the same car.

Starting Tuesday, Uber riders can anticipate messages in the app that remind them to “flatten the curve” and to only “travel when necessary.”

The airport is considered an essential service during shelter-in-place orders and will remain operational.

The "shelter in place" order considers the Airport as an essential service.#SFO remains open & continues to operate at this time. You can travel to the Airport for flights. Please check with your airline for questions regarding flight status.

We’re here to help with questions.