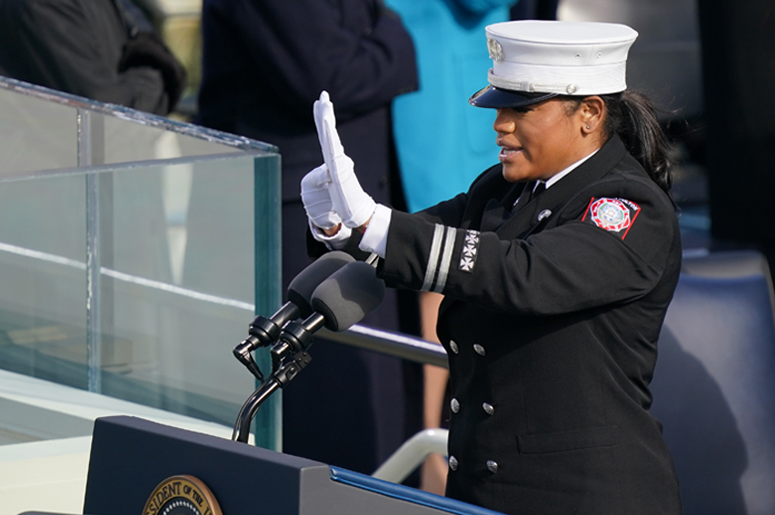 Who is Andrea Hall? Oh you know, just the first Black woman to get hired at the city of Albany Fire Department and later promoted to the position of Fire Captain, which she’s held for 16 years. Not to mention, the President of her local International Association of Firefighters.

All of which are just some of the accolades that led her garner the much-deserved honor of reciting the Pledge of Allegiance during yesterday’s historic inauguration of President Joe Biden and Vice President Kamala Harris.

Just one day after the momentous occasion, Hall called in to chat with RADIO.COM and V-103’s Big Tigger all about her her-story making role at the inaugural celebration.

After noting she was asked by the General President of International Association of Firefighters, as well as Biden’s Inaugural Committee Andrea admitted, “the entire experience was absolutely fantastic, I was very humbled by the invitation.”

Besides “fantastic, Hall also found the experience a little nerve-wracking, which actually isn’t for the reasons you might think. Not only did she recite the Pledge of Allegiance, but she also accompanied the reading with sign language which she revealed was not previously discussed and an “element of surprise,” she was “nervous as heck” about.

However, surpassing her nerves was excitement, “to be able to communicate in a language that is so personal to family and friends.”

Personifying a quote Vice President Kamala Harris shared in her inauguration speech, “you may be the first to do many things, but make sure you’re not the last." For Hall, “being the first is not something that I ever set out to do. I had something in mind that I was trying to accomplish, and it just happened to be that I was the first.”

For all that and more, including her fangirl moment listen to Tigger’s entire interview with Andrea Hall above.