Burger King is putting aside its “beef” with McDonald’s and playing nice with other fast food franchises.

The burger chain is encouraging customers to dine at competitor chains as the U.K. goes into a second lockdown amid the coronavirus pandemic.

"Just like we never thought we'd be encouraging you to order from KFC, Subway, Domino's Pizza, Pizza Hut, Five Guys, Greggs, Taco Bell, Papa John's, Leon... or any of the other independent food outlets, too numerous to mention here,” the statement began.

We know, we never thought we’d be saying this either. pic.twitter.com/cVRMSLSDq6

"In short, from any of our sister food chains (fast or not so fast),” Burger King UK continued.

The chain encouraged customers to support all fast food employees: "We never thought we'd be asking you to do this, but restaurants employing thousands of staff really need your support at the moment.

"So, if you want to help, keep treating yourself to tasty meals through home delivery, takeaway or drive thru,' the chain added.

"Getting a Whopper is always best, but ordering a Big Mac is also not such a bad thing,” it concluded. 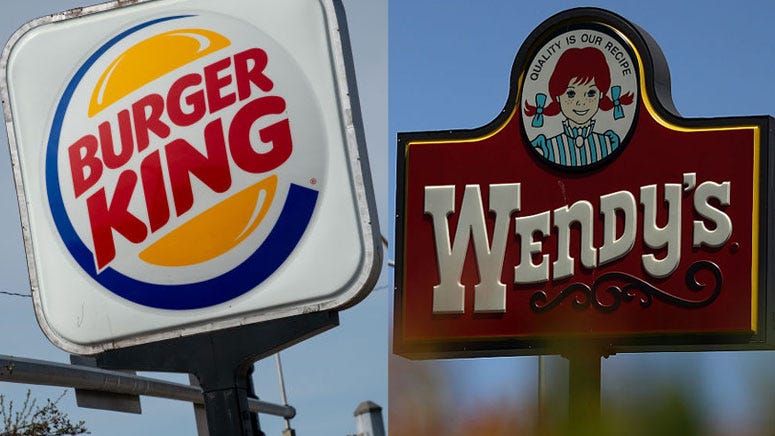 Burger King and McDonald’s have a tendency to troll and hurl playful insults at one another via social media and promotion, but during these difficult times, the chain is realizing the importance of sticking together.

Pizza Hut, Five Guys, Taco Bell, Papa John’s and Domino’s also received a mention, along with independent burger joints that may need all the support they can get.

The U.K. restaurant and hospitality industry has been hit hard by the pandemic, especially as new restrictions have forced all restaurants, pubs, and shops to shut down for a four week period, the New York Times reports.

McDonald’s previously released a statement confirming that while dine-in will be closed, drive-thru and delivery service will remain open for the following four weeks of lockdowns, per MSN.

On Saturday, Britain reported 21,915 new infections. The death toll from the virus is 58,925, one of the highest in Europe.