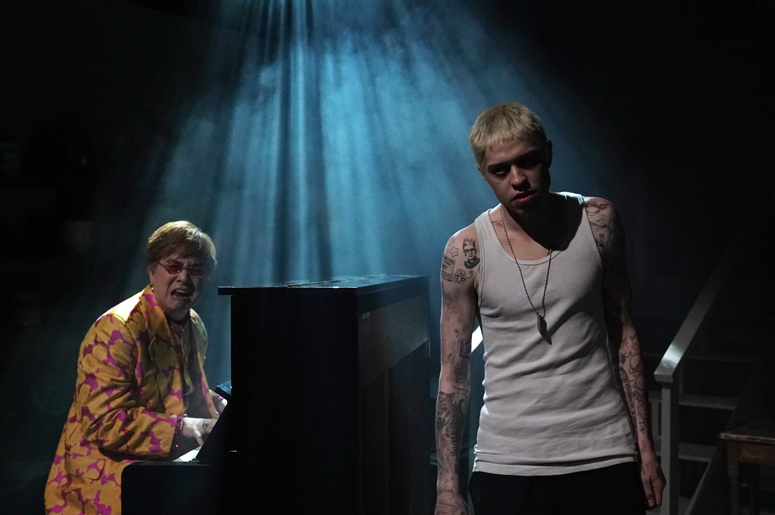 In the latest Saturday Night Live episode, Pete Davidson pulled of a festive, yet not gonna lie, slightly sketchy spoof of an Eminem’s classic.

The episode, hosted by Jason Bateman, included a pre-filmed segment called "Stu" that featured Pete parodying Eminem's 2000 single "Stan" with a Christmas twist. Davidson stars in the parody as Stu, an obsessed fan of Santa Claus, played by Bateman.

Sporting a white tank and bleached blonde hair, Davidson's Stu spends nearly the entire segment writing his lyrical letters to Santa Claus in his murdery basement, begging for a PlayStation 5. As his letters go unanswered, Stu gets increasingly frustrated and angry.

Kate McKinnon appears in the skit as the perfect Dido, who was featured in the original song and music video, while Bowen Yang portrays Elton John, who famously joined Em for a duet of "Stan" at the 43rd Grammy Awards in 2001.

Oh and check this, Marshall Mathers himself even made a cameo at the end. No seriously, after a message that reads “Please stand by for Slim Shady,” appeared on the screen of Stu’s TV, the actual Eminem is revealed. Dressed in a Christmas sweater, he opens his gift from Santa, and guess what he got, a PlayStation 5, which is exactly what Stu desperately wanted. "I didn't even ask for this. I guess Shady must have been a good boy this year," Eminem says. "Sorry, Stu. You f****ed up."

SNL doesn’t always get it right, but honestly this one’s a must see. So what are you waiting for, check it out below.